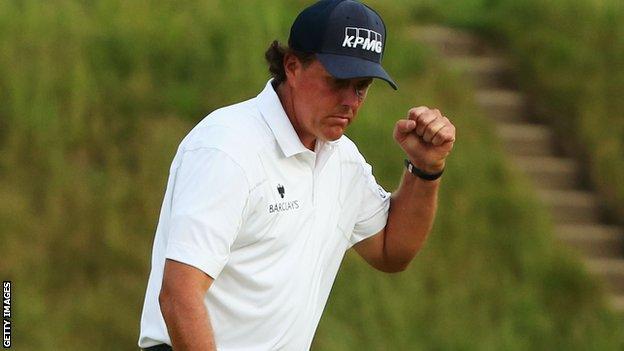 Phil Mickelson will hope to end his US Open heartache as he takes a one-shot lead into the final round at Merion.

The five-time runner-up, who turns 43 on Sunday, shot 70 on an absorbing day to end one under ahead of Hunter Mahan, Steve Stricker and Charl Schwartzel.

England's Luke Donald double-bogeyed the last for a 71 to join countryman Justin Rose (71) and American Billy Horschel (72) at one over.

Left-hander Mickelson, who led at the conclusion of the second round earlier on Saturday, dropped out of the lead with bogeys on the second and fifth but got the shots back at the 10th and 11th before regaining top spot with a birdie to Donald's bogey on the 254-yard par-three 17.

Mickelson, who has won three Masters titles and one US PGA, bogeyed the last but is excited by what lays ahead.

"I'm looking forward to it and the challenge of Merion. I love being in the thick of it," he said.

"I have had opportunities to win and it's been fun even though it has been heartbreaking to let it slide, but I feel better equipped than ever and I feel very comfortable on this course.

"Given that I have had some major successes I feel as equipped as I could be. I don't think I feel any more pressure than anyone else who wants to win. But it would certainly mean a lot to me."

Phil Mickelson's US Open near misses

The 35-year-old Donald, hoping to become the first Englishman since Tony Jacklin in 1970 to win the US Open, found rough short of the 18th green and sculled his chip across the putting surface as he amassed a six to leave a sour taste.

"I should have done better," said Donald, who has yet to have a top-10 finish in nine US Opens.

"It was disappointing but I'll take the positives out of today, a really solid 16 holes of golf that I played and I'm only two back.

"When you look at Phil, he started winning majors around 34 or 35 so I think that I have some time on my side, luckily, in this game. Of course that's my goal. I got to number one in the world and I've won a great amount of tournaments around the world, but I would dearly love to win one of these."

Rose also ended poorly with two bogeys on the final two holes, but both he and Donald are in a good position to end England's 17-year major drought stretching back to Nick Faldo's last Masters triumph in 1996.

"One or two shots on this golf course can disappear in a heartbeat," said Rose. "I feel like I'm in great position. If you would have said to me on Thursday morning this is where you're going to be entering Sunday, I would absolutely have taken it."

Australian Jason Day carded 68 for two over and American Rickie Fowler fired the round of the day - a 67 - to end three over.

The biggest comeback by a US Open champion in the final round is the seven strokes Arnold Palmer made up to triumph at Cherry Hills in 1960.

Woods and McIlroy, playing together for the third straight day, both began at three over but the world's top two players were unable to inspire each other and faded from the picture.

Woods, chasing a 15th major title and first since 2008, kicked off with a birdie but then leaked seven bogeys to match his worst round as a pro at the US Open.

"It is certainly frustrating because I certainly was feeling like I was playing well this week and I just didn't make the putts I needed to make," said the world number one, who has won four times this season and was fourth in the Masters at Augusta.

McIlroy, the 2011 champion, also birdied the first but drove out of bounds on the second and mixed two birdies with seven bogeys overall.

"I've been working on the swing quite hard over the last few months, and it looks really good on camera. I just get on the course and I hit a couple of bad shots and I guess that it sort of makes you lose confidence a little bit during the round.

"It's just a bit of a struggle and it seems like I've had a few too many tournaments this year where I've struggled in one round or a couple of rounds and not been able to put it all together.

"I don't feel like it's too far away at all. It's just a matter of believing and staying patient."

England's Ian Poulter was in serious contention after birdies at six and eight but he drove out of bounds on 15 and made a double bogey before dropping two more shots on 16 and 18 for a 73 and five over.

Three-time major champion Padraig Harrington (75), England's John Parry (72) and Welshman Jamie Donaldson (73) were nine over, while Masters champion Adam Scott added a 73 to rounds of 72, 75 for 10 over.

Sergio Garcia, who was the subject of abuse from hecklers following his "fried chicken" remarks to Tiger Woods, dropped to 11 over after a round of 75 which included a 10 on the 15th after hitting three balls out of bounds off the tee.

Florida-based Scot Russell Knox shot 77 to also finish 11 over, while countryman Martin Laird had 76 for 13 over. David Howell was 15 over, Irish amateur Kevin Phelan 16 over and Simon Khan, who lost a play-off to Matteo Manassero at Wentworth, 20 over.