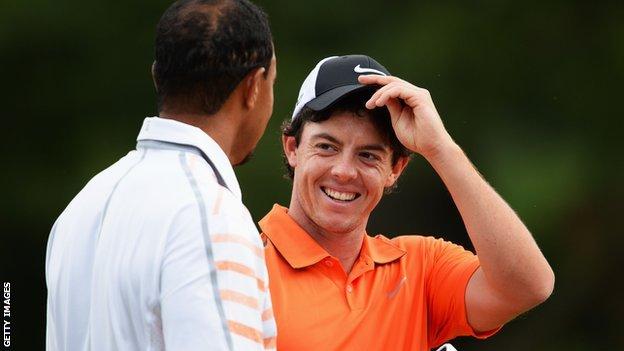 Northern Ireland's Rory McIlroy is just four shots behind the leaders after firing a second round of level-par 70 at the Merion Golf Club.

The world number two completed his first round of 73 on Friday, before carding four birdies and four bogeys in round two to lie on three over par.

Phil Mickelson and fellow American Billy Horschel share the lead on one under par.

Graeme McDowell and Darren Clarke will miss the cut.

Former champion McDowell followed his opening 76 with a 77 to end seven over, while Clarke had rounds of 80 and 75.

The 2011 Open champion lies near the bottom of the field on 15 over after an improved second 18 holes which included a double bogey at the 17th, four bogeys and a solitary birdie two at the 13th.

McIlroy started his second round from the 11th hole, in the company of Tiger Woods, who is also three over for the tournament.

"My game was solid enough and I'm still right there for the weekend," said McIlroy after his second round.

"I birdied my first two holes and then got through that tough stretch between the 14th and 18th holes in just one over.

"Every time I made a birdie, I seemed to make a bogey then straight away - it's difficult out there and the course tests every aspect of your game.

"You've got to be very tactical, have a good gameplan and be strong mentally.

"You feel like you can shoot a good score but the position of the pins make it difficult," added the 2011 champion.

McDowell endured a disastrous second round, which included three birdies, but was marred by two bogeys and four double bogeys.