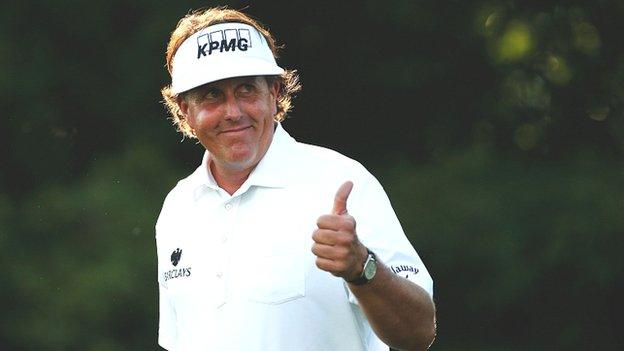 Phil Mickelson birdied the last to join fellow American Billy Horschel in a tie for a one-shot lead at the end of day two of the US Open at Merion.

Mickelson hit 72 and Horschel fired a stunning three-under 67 to finish one under on a dry but difficult day.

Luke Donald (72), Steve Stricker (69) and Justin Rose (69) ended level with Ian Poulter and Chinese Taipei amateur Pan Cheng-Tsung, who are yet to finish.

Tiger Woods and Rory McIlroy both carded 70s to end three over.

Play was suspended because of light at about 20:30 local time (01:30 BST) with 68 players still to complete round two after the rain-hit opening day backed up the schedule.

Merion is proving a brutal test. It is going to take supreme shot-making to triumph and Justin Rose has demonstrated those qualities in abundance so far. The Englishman is only one stroke behind and no player in the field appears more confident in their swing at the moment. If his putter wakes up this could be his weekend. Luke Donald needs more consistency tee to green, while Ian Poulter resumes with the tough closing four holes to complete, but like Donald and Rose is firmly in the mix just a stroke behind.

Five-time runner-up Mickelson led at the conclusion of the first round on Friday morning, and threatened to open a sizeable gap before missing a succession of birdie putts in a sunny but breezy second round.

Bogeys at 12 and 13 further scuppered his challenge but a 15ft putt across the 18th green put him back on top as he chases a fourth major title on Sunday, his 43rd birthday.

"I had many opportunities on holes I should be able to birdie but didn't capitalise, but I played the hard holes extremely well and made pars," said the left-hander.

"I fought hard, hung in there, even though the score wasn't what I wanted."

Horschel, a PGA Tour winner this season, mastered Merion's mysteries better than anyone by hitting all 18 greens in regulation in his 67, one of only three rounds completed under par along with Stricker and Rose.

Donald, who led by one at four under on Thursday evening, dropped two shots in his last three holes for a first-round 68, and then dropped to one over with four straight bogeys on the back nine of his second round before rallying.

At 6,996 yards, Merion, which last staged a US Open in 1981, was feared to be too short by modern standards, but a combination of tight fairways, thick rough, tricky greens and difficult pin placements have kept low-scoring at bay. "I think Merion is holding its own, for sure," said Donald, who is among those aiming to be the first English winner since Tony Jacklin in 1970.

If you miss the fairway, you can't get the ball on the green. And the longer holes are brutal

Fellow Englishman Poulter was one under for his second round after 14 holes when play was called off, while the 21-year-old Pan was two under for the day after nine.

Woods resumed at two over after 10 on Friday morning and ended with a first-round 73 before mixing three birdies with three bogeys in his second.

"Unless you have played practice rounds out here and you've seen the golf course, you don't realise how difficult it is," said the 14-time major champion, who was nursing an elbow injury apparently picked up at the Players Championship last month.

"The short holes are short, but if you miss the fairway, you can't get the ball on the green. And the longer holes are brutal.

"And this is probably the stiffest set of par-threes that we ever face."

His playing partner McIlroy dropped three shots in his last four holes to end his first round at three over and swapped four birdies with four bogeys on Friday afternoon.

Like Woods, he was satisfied with his situation as the tricky conditions brought the field back to them.

The projected cut to reduce the field to the top 60 and ties was estimated to come at seven over par.

Lee Westwood carded 77 to sit on seven over alongside Masters champion Adam Scott (75) and Scotland's Paul Lawrie, who was appointed OBE in the Queen's Birthday Honours.

England's David Howell ended eight over, but Northern Irish pair Graeme McDowell, the 2010 champion, and 2011 Open winner Darren Clarke will miss the weekend at 13 and 15 over respectively.