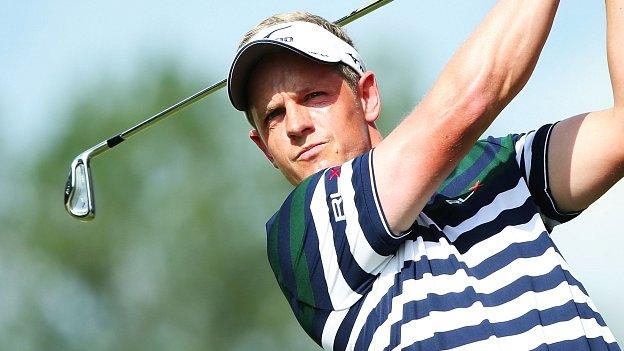 Luke Donald edged ahead of Phil Mickelson with his final shot to lead by one after a rain-hit first day of the 113th US Open at Merion.

The Englishman reached four under after 13 before play was called off, with Mickelson in the clubhouse after a 67.

Adam Scott also got to three under, with holder Webb Simpson, Matthew Goggin and Alistair Presnell two under.

Tiger Woods, who appeared to injure his left wrist, was two over after 10 with playing partner Rory McIlroy level par.

Play was suspended for three-and-a-half hours on Thursday morning because of severe storms and then again for a short time later in the day, leaving almost half of the field to finish their rounds at 0715 (1215 BST) on Friday.

Although Mickelson has been overtaken by Donald at the top of the leaderboard, the left-hander will feel happier with his position. Mickelson can look forward to a leisurely morning, while Donald will toil with the toughest stretch of the course when he resumes. On the 14th tee he will face a changed wind and a long road home. Lee Westwood will sleep on a bad break - his ball cannoning off the unique Merion basket and costing him a double bogey at the 12th when he was sharing the lead. Tiger Woods, at two over par, is nursing a sore left wrist. He's won a US Open on one leg, Woods might have to do this one with one arm.

Merion's iconic East course is the shortest US Open venue for nine years at 6,996 yards, but only 15 players were under par when the claxon went to call off play for the evening just before 2030 local time (0130 BST).

Former world number one Donald, trying to be England's first US Open winner since Tony Jacklin in 1970, has not had a top-10 finish in nine US Opens but his controlled game seems well-suited to Merion's tight layout.

He birdied the first and third and bogeyed the fifth before three straight birdies from 11 took him past Mickelson.

"The weather conditions are making the course a lot softer, and you can attack the pins a little bit more," said the 35-year-old Donald. "So it's playing as gentle as it might play so far.

"I've got five holes left and five pretty tough ones to finish, but really happy with the way I started my round."

The five-time US Open runner-up led for most of the day despite landing back in Philadephia at 0330 after dashing back to San Diego for his oldest daughter's eight grade graduation ceremony on Wednesday.

The left-hander, who will be 43 on Sunday, carded his lowest first-round score in 23 US Opens as he chases his first national title to add to three Masters and a US PGA.

Mickelson said he managed to get just enough sleep on his private jet and in the morning's weather delay and insists he used his travel time wisely.

"I was able to take the time on the plane to read my notes, study, relive the golf course, go through how I was going to play each hole, where the pins were, where I want to miss it, where I want to be, study the green charts," he said.

"It gave me a great few hours to study my notes and get mentally prepared."

Masters champion Scott, the world number three, birdied the 11th with his final shot to get to three under and pip playing partners Woods and McIlroy, the world's top two.

McIlroy, bidding for a third major title at just 24, also chose to finish off after the horn had sounded but missed, while Woods opted to return in the morning to attempt his short par putt.

Woods, who won the last of his 14 majors titles at the 2008 US Open, seemed to hurt his wrist in rough on the first hole and after a couple more twinges, suffered visible pain again on the 11th.

"It's going to be a fast night," Woods said after his round, while claiming the wrist to be "fine". "I've got a lot of holes to play tomorrow. And hopefully I can play a little better than I did today."

Belgian Ryder Cup player Nicolas Colsaerts carded a 69 for one under, the same score as Lee Westwood.

The Englishman was unlucky to see his approach to the 12th hit the wicker basket on top of the pin - a feature unique to Merion - and ricochet back off the green, leading to a double bogey after tieing for the lead.

Justin Rose ended one over after a 71, as did Ian Poulter, who led early on with three opening birdies before finding it a struggle when play resumed following the morning's weather delay.

Sergio Garcia, who left a note in Woods's locker to apologise for his "fried chicken" remark, admitted he was heckled on the course but declined the offer to have any of the crowd ejected.

"There were a couple here and there, but I felt the people were very nice for the whole day," said Garcia, who fought back to a 73 after going out in 40 with a double bogey followed by a quadruple bogey. "I think that almost all of them were behind me and that was nice to see."