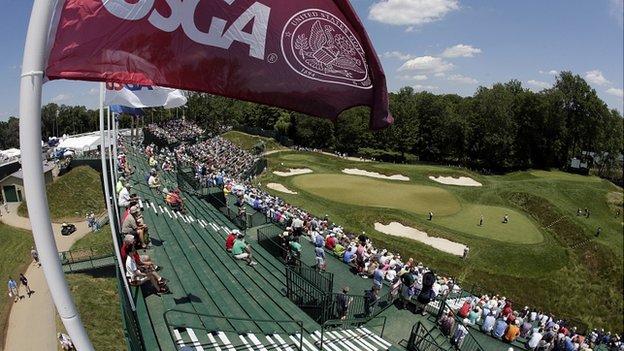 The 113th US Open gets under way at Merion near Philadelphia on Thursday with thunderstorms and high winds forecast to hamper the first round.

The iconic East course was hit by heavy rain on Monday and organisers are braced for up to three inches more.

"It depends on what hits or how unlucky we are," said event chief Mike Davis.

Tiger Woods is the favourite to secure a first major title since 2008 and will play with 2011 champion Rory McIlroy and Masters winner Adam Scott.

Merion is hosting the US Open for the fifth time in its history but the first since 1981, after which it was thought to be too short for the modern game and the expanding infrastructure needed at a major tournament.

At 6,996 yards, Merion is the first US Open venue under 7,000 yards since Shinnecock Hills in 2004. Its unique blend of short and long holes, narrow fairways, thick rough and challenging greens offer its main defence, requiring precision off the tee and an in-form wedge game.

Some fear the short layout, softened by rain, could see the tournament-record round of 63 threatened, but Northern Ireland's Graeme McDowell disagrees.

"I think they're underestimating it," said the 2010 US Open champion.

"I think there's 10 or 11 holes on this course that are as tough as any US Open I've seen. The last five holes, I can't think of a tougher finish at a US Open."

Woods, the 14-time major champion, has won four times this season and had a controversial near-miss at the Masters when he was penalised two shots for an illegal drop, finishing tied fourth.

The 37-year-old could join the list of famous winners at Merion which includes Bobby Jones, Ben Hogan and Lee Trevino, but Woods suffered an aberration in the recent Memorial tournament to end tied 65th and is not getting carried away.

"We've got a long way to go," said the American, whose last major win came five years ago when he clinched the US Open on a broken leg at Torrey Pines.

"I just enter events to win and that's it, whether there's a lot of people following or there's nobody out there. That's why I played as a junior, all the way through to now is just to try to kick everyone's butt. That to me is the rush. That's the fun. That's the thrill."

World number two McIlroy won the first of his two majors with a record 16 under par in a rain-softened US Open at Congressional in 2011, but is winless this season and missed the cut at Wentworth at the end of last month.

"It feels very close, I'm driving the ball well and my iron play's great and if I put it all together I feel like I can have a great week," said the 22-year-old.

McDowell, who was tied second behind Webb Simpson at Olympic Club last year, has won twice this term, sandwiched by two missed cuts, and is talked of as another likely contender.

American world number four Matt Kuchar is the only other player, along with Woods and McDowell, to have won more than once this season.

England is still chasing a first US Open winner since Tony Jacklin in 1970, but Justin Rose and Luke Donald, ranked fifth and sixth in the world, possess the type of controlled games that might prosper at Merion. Lee Westwood is another tipped to do well, with nine top 10s in his last 14 majors, including the last two US Opens.

The first groups tee off the first and 11th tees at 11:45 BST (06:45 local time) on Thursday, with the bad weather due to come in during the afternoon.

Woods, McIlroy and Scott are set to tee off at 18:14 BST, with Donald, Lee Westwood and Martin Kaymer away at 17:52 BST.

Kuchar and Rose play together at 12:22 BST ahead of five-time US Open runner Phil Mickelson, while Sergio Garcia, who shook hands with Woods on Monday and left a note of apology in his locker to try to resolve their recent row, starts at 12:44 BST.