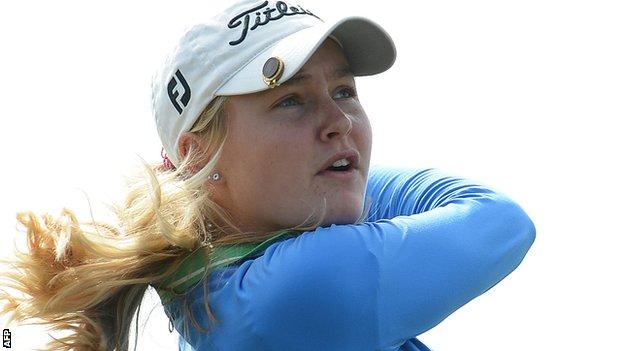 Having made her professional debut in March, the 17-year-old from Kettering is hoping to become Europe's youngest-ever Solheim Cup player.

"It's definitely in my mind but you've got to carry on doing well," Hull told BBC Radio Northampton.

"I feel like professional golf is where I belong."

She added: "I didn't see there would be any point staying in amateur golf - this is where I wanted to be."

Hull would need to be in the top four of the Ladies' European Tour Solheim Cup rankings, or be one of four captain's picks, to compete in the women's equivalent of the Ryder Cup, against the United States in Colorado, in August.

She is currently seventh but is the Tour's top earner, having collected 76,960 euros (about £65,470) - although last Sunday's German Open, where she finished second, is still to be counted.

Hull was very close to winning her maiden title in Germany, after only missing out to last year's European number one Carlota Ciganda in a play-off.

The teenager came to prominence as a nine-year-old when she won the Ladies' Golf Union's Health Perception Championship at Turnberry in 2005.

After impressing as an amateur last year, having finished 18th at the British Masters and 38th at the LPGA Kraft Nabisco Championship, Hull was given a conditional card for this year's European Tour.

And she believes she is fitting in well with her experienced opponents.

"The other players are saying 'well done' and 'you're doing well'," added Hull.

"To get my first win, I do just keep thinking to myself I should do another hour [training] but I'm going to play golf and not think about it too much.

"I like the way Carlota Ciganda, Yani Tseng, Laura Davies and Lee-Anne Pace play and how they handle themselves."