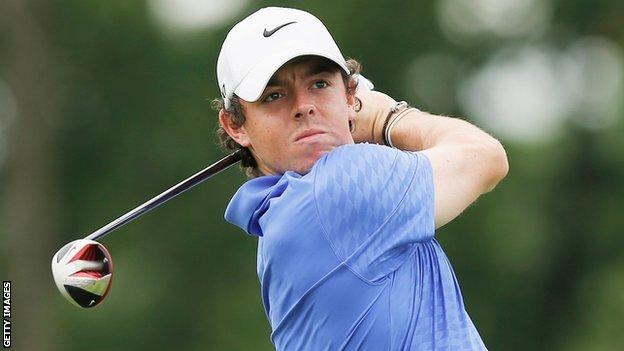 It is the exam season - and that doesn't just apply to the studious youth. The same can be said of the world's top golfers as they ready themselves for the tests that define careers.

From the moment the US Open tees off on 13 June, the players will have just 60 days to emulate Masters winner Adam Scott and make their year with a major title.

In the most intense and important spell of the golfing calendar, the Open and PGA rapidly follow 2013's second major, which will be staged at Merion next week.

And worryingly - from a European point of view - there is little ground for optimism after a largely disappointing year so far.

I approach majors with just that little bit of a different intensity level - you have to. You expect it will be a long week mentally more than physically

For Rory McIlroy, Luke Donald and Lee Westwood, the predicted grades are modest at best. None of these recent former world number ones has shown form to suggest any of them will emerge top of the class in the papers that count the most.

McIlroy's search for the level of performance that made him the game's dominant figure last year is growing ever more desperate.

He insists his best form "doesn't feel too far away", but his finish at last week's Memorial Tournament - where he tied for 57th place - was another depressing return in what has been a winless season so far.

The 24-year-old from Northern Ireland has struggled to maintain his concentration this year, while self-confessed ruinous errors have undermined far too many of his scorecards.

McIlroy admits there is "something up" regarding his management company, with whom he appears to have split. Neither party has commented publicly.

The player insists the situation is not adversely affecting his golf, but performances like his first-round 78 at Jack Nicklaus's tournament last week suggest otherwise.

This week he makes a revision mission to Merion in order to ready himself for the US Open in the knowledge that he will need a clear mind to contend.

"I approach majors with just that little bit of a different intensity level - you have to," McIlroy said. "You expect it will be a long week mentally more than physically."

Of course, he has the comfort of two majors to his name at a very tender age. He can afford a barren year at the game's biggest championships more so than many of his other European rivals, as he has plenty of time on his side.

The same can't be said of the 40-year-old Westwood, who seemed to suffer a hangover from his poor finish at the BMW PGA Championship with a miserable missed cut at the Memorial.

Whatever spin the Englishman, who is now based in America, puts on that performance, it has to go down as a badly missed opportunity.

He went to Wentworth confident and nothing suggested the optimism was ill-founded - until his game collapsed after leading by two with 13 holes left to play.

It is tempting to feel more mental scars will have been imparted on a player who has seven top-three finishes in majors, but no victories.

"You've just got to keep working on the things that are letting you down," Westwood said. "I've been in contention a lot of times and come close.

"I think one of my major weaknesses was my short game, but now that's looking really solid. And I feel like I can contend more in major championships."

Westwood will be playing for one of the big four titles for the 61st time next week.

Meanwhile, another Englishman - Donald - boasts just two top-three finishes from 39 major attempts. This year he has struggled for the consistency that has been his trademark in recent seasons.

The highlights for the world number seven have been scant - a share of third at Hilton Head and a tied-fourth finish in Tampa.

Last week in Ohio he was bemused after a closing 70 left him in a tie for 21st place.

"Twenty birdies for the week and finish at -1!" Donald tweeted. "Not quite sure if that's good or bad?"

"We can tighten up the rest."

Those corrections will need to be made quickly for a man who languishes 159th on the PGA Tour's Greens in Regulation statistics this year. Finding fairways and greens at Merion, Muirfield (the Open) and Oak Hill (PGA) will be of paramount importance.

On 2013 form alone, two-time winner Graeme McDowell must be regarded as Europe's best hope in Pennsylvania next week. The Portrush man also knows what it takes to win a US Open after triumphing at Pebble Beach in 2010.

Wentworth champion Matteo Manassero also has to be viewed as a genuine contender given the form that made him the overwhelming choice as European Tour Golfer of the Month for May.

Justin Rose appears to have the components and consistency, while Sergio Garcia certainly has the game and improved putting stats to feature. But the Spaniard is likely to be weighed down by too much baggage after his recent spat with Tiger Woods.

For everyone else, it is merely the dominant golf of the world number one that makes the coming exams so tough.

Forget his blow-up at the Memorial. With four wins from eight stroke-play tournaments, Woods knows he has already attained top marks in what you might regard as the "mock" exams.

Now he will surely feel supremely confident he can do it in the real thing and, if he does come through the next couple of months with more major titles to add to the 14 he has already amassed, his pursuit of Nicklaus's record haul of 18 will be ever closer.