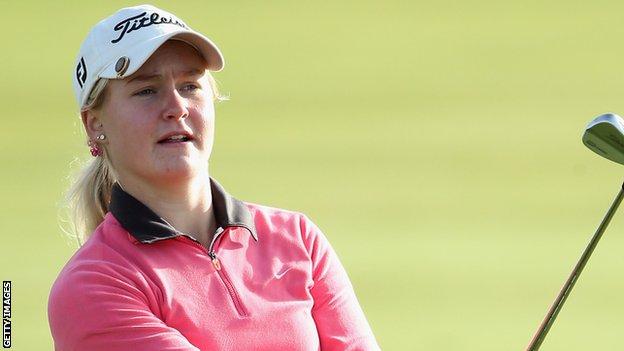 English 17-year-old Charley Hull finished second in the Ladies German Open after being beaten in a sudden-death play-off by Carlota Ciganda.

Heavy rain forced the abandonment of the final two rounds at Golfpark Gut Hausern near Munich, with Hull and Spaniard Ciganda tied at six under par.

In the play-off, held at the 15th hole, Ciganda made birdie while Hull's effort from 20 feet came up just short.

Hull has made an impressive start to life on the Ladies European Tour, finishing second in her first five events of the season.

In winning her third Tour title, Ciganda picked up a cheque for nearly £45,000.

"I hit a great shot, but I'm very lucky to make that putt. The greens... were slow and I hit a good putt and won so I'm very happy," said the 23-year-old on ladieseuropeantour.com

Hull, from Kettering in Northamptonshire, graduated from Tour school in Morocco in December and is regarded as one of the world's most promising young golfers.

In 2012, she reached number three in the world amateur rankings and was a member of Great Britain and Ireland's winning Curtis Cup team against the United States.