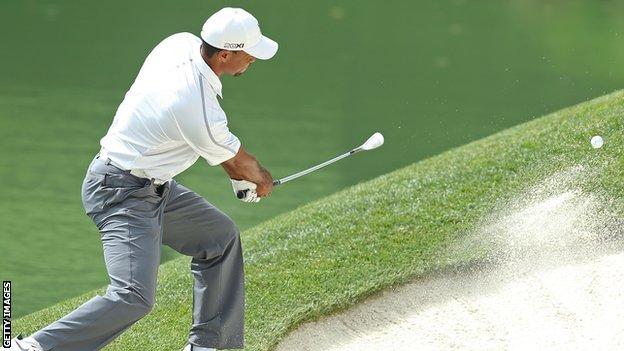 Tiger Woods ran up the highest nine-hole score of his professional career with an outward 44 in the third round of the Memorial Tournament in Ohio.

The world number one, who started on the 10th, leaked double bogeys on the 12th and 15th, dropped another shot on the 17th and triple-bogeyed the 18th.

He picked up three shots after the turn but made further bogeys at the sixth and ninth for a round of 79.

The 14-time major winner is eight over par, 16 shots behind Matt Kuchar.

This was defending champion and five-time winner Woods's worst ever round at Jack Nicklaus's Muirfield Village course.

"It was a rough day. It was tough out there from beginning to end," Woods said.

His previous highest nine-hole score was 43 - something he fired on three occasions, most recently at Quail Hollow in 2010 when he also shot a 79.

Woods's most ugly 18-hole score was an 81 he compiled in brutal conditions during the third round of the 2002 Open at Muirfield in Scotland.

Kuchar leads the tournament after 54 holes having carded a two-under-par 70 for an overall score of eight under.

The only European in the top-10 is Justin Rose. The Englishman's 71 leaves him in contention on five under.

After narrowly qualifying for the weekend's action following an opening-round 78, Northern Ireland's Rory McIlroy had another poor day.

His 75 leaves him at six over par, two ahead of Woods but 14 adrift of Kuchar.