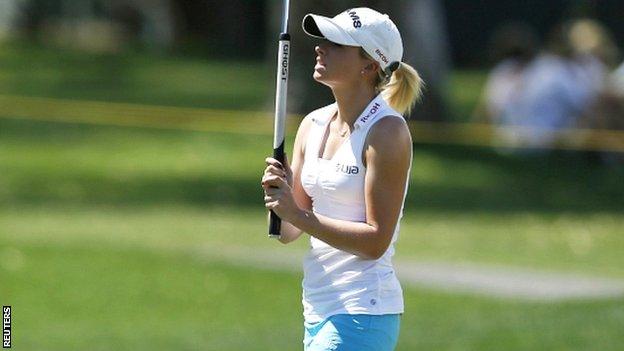 England's Jodi Ewart Shadoff posted a third-round 74 to fall 10 shots off the lead at the first women's major of the year, the Kraft Nabisco Championship.

The first round co-leader dropped three shots in two holes on the front nine and is two under par for the event.

Karrie Webb also recorded a 67 and is six back, but world number one Stacy Lewis is 11 shots adrift.

Webb, 38, won the last of her seven majors at this championship in 2006 when she scored a final-round 65 to get into a play-off before a birdie at the first extra hole gave her a second Kraft Nabisco title.

The Australian has not won since March 2011 but compiled seven birdies in round three to move into a share of third place.

Park, the world number four who won the US Open title in 2008 as a 19-year-old, has made only two bogeys this week and continued her impressive performance on the greens, with a total of 83 putts for the three rounds thus far.

"I think I played really good here in the last few years but I just couldn't putt that well on these greens, but this year it seems I'm reading the breaks really good and the putts are rolling in so that's been the big difference," said the South Korean, whose best finish in six appearances in this event is ninth.

The best round of the day came from American Angela Stanford, the world number 18, who made seven birdies in a 66 to share third place at six under, while 2011 champion Lewis returned a 71 comprising three birdies and two dropped shots.

Ewart Shadoff, the world number 110, had three birdies in four holes on the back nine and is in a tie for 17th, remaining the highest-placed British player, with Scot Catriona Matthew one shot further back at one under after five birdies in a 70.