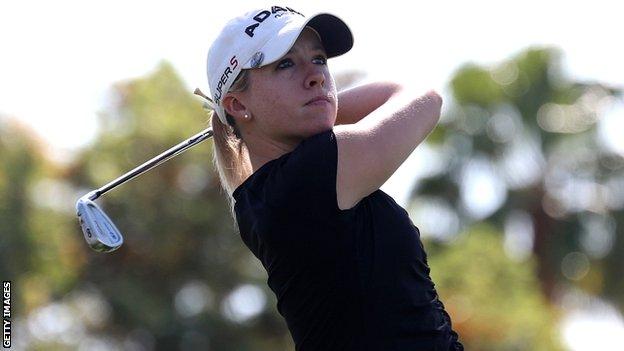 Jodi Ewart Shadoff stayed in contention at the first women's major of the year after a 72 left her three off the pace at the Kraft Nabisco Championship.

The first day leader is four under, with Inbee Park of South Korea leading the field by a shot at seven under.

World number one Stacey Lewis moved to level par after a 71 but defending champion Sun Young Yoo missed the cut by four shots at nine over.

Becky Morgan of Wales was also nine over, England's Georgia Hall 10 over.

Her two co-leaders at the start of the second round, Norway's Suzann Pettersen and South Korean Na Yeon Choi, both dropped back with rounds of 75.

I like to chase the lead rather than be in the lead, so it kind of spurs me on a lot

World number two Yani Tseng was another to struggle to a 75, drifting from level par at the start of her second round to three over, following a triple bogey seven at the seventh.

At two under are three high-profile Americans: former US Open champion Paula Creamer, who had six birdies in a fine 68, long-hitting Michelle Wie, who has broken 70 only twice in 16 rounds this season but who also had six birdies in her 70, and twice major-winner Christie Kerr, who posted five birdies, but bogeyed three successive holes from the 15th.

Park, the 2008 US Women's Open champion, who was second at last year's British Open, produced the best score of the day, collecting six birdies in her opening 13 holes before a solitary dropped shot at the 14th to finish with a 67.

Asked about her chances for the final two rounds, Ewart Shadoff, who has finished 16th and joint 43rd this season, said: "I'm honestly just going to go out there and do what I've been doing in the last two rounds. I'm really comfortable with where my game is.

"I wasn't really hitting my driver that well yesterday, and I hit it probably the best club in my bag today. So I'm really happy with where I am there.

"Obviously putts weren't dropping today, so, hopefully, I can find a middle ground on that tomorrow. But I expect there to be a couple of good rounds. I like to chase the lead rather than be in the lead, so it kind of spurs me on a lot."