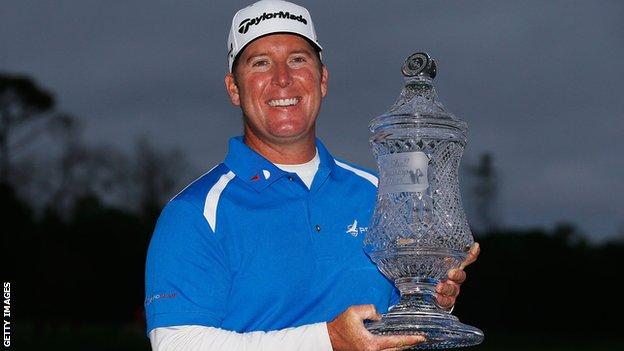 American DA Points held his nerve on the 18th hole to win the Houston Open by a single stroke.

Following a rain-affected final day, Points made par on the final hole to finish on 16 under and hold off Henrik Stenson and Billy Horschel.

England's Lee Westwood, who started the day two shots off the leaders, bogeyed the 17th to finish tied for 10th.

Rory McIlroy, who could have reclaimed his world number one ranking with victory, was joint 45th.

However, the Northern Irishman did manage his third consecutive under-par round on the final day to boost his confidence ahead of the Masters on 11 April.

"There are a lot of positives to take from it," he said. "I've learned a few things as well that I can bring into next week and obviously looking ahead to Augusta, too.

"It's been a productive week."

Points earned his place at the Masters with this victory in Texas, thanks to some help from his mother's putter, which he had refurbished earlier in the week in an attempt to improve his play on the greens.

The 36-year-old, whose only previous PGA Tour win came in the Pebble Beach National Pro-Am in 2011, was in contention all week after taking the lead on the first day with a round of eight under. He added six birdies on the final day to complete victory.

"It's been a really tough year, a tough start," said Points, who had missed seven of his last nine cuts. "To have a putt to win - you want that starting out every week.

"I would have liked it to be a little closer, but I've been putting really well."

Stewart Cink and Bill Haas started the final day as joint leaders but both dropped out of contention - Cink finishing with a bogey when an eagle would have sent him into a play-off with Points.

Stenson bogeyed the 13th but birdies at four of the final five holes saw him finish runner-up with Horschel, who earned his second-place finish with five birdies on the front nine.

England's Brian Davis fired 67 on the final day to finish in a tie for sixth, one shot behind Dustin Johnson and Ben Crane.