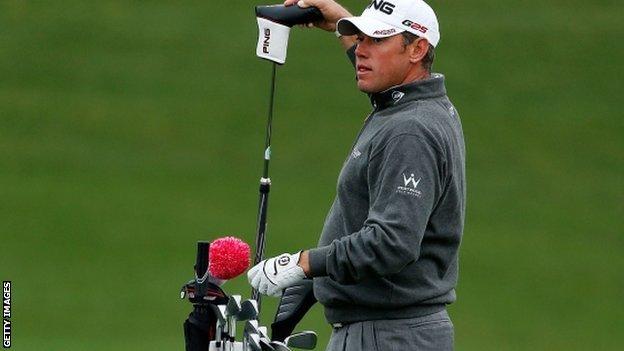 Lee Westwood carded a five-under-par 67 to move to nine under and within two shots of third-round leaders Stewart Cink and Bill Haas at the Houston Open.

After parring his first seven holes, the Englishman birdied six of the next nine before bogeying the 17th.

"I played much more solid today," said Westwood. "I played the par fives in three under par. The first day I was one over. You can't afford to do that."

Lee Westwood has not won a tournament on the PGA Tour since the St Jude Classic in June 2010.

"Today, it was obviously a lot better. I'll shoot lower scores if I start playing the par-fives better."

Halfway leader Steve Wheatcroft is in a group of four players at 10 under, while three late bogeys ended a Rory McIlroy charge (71) as he moved to two under.

The Northern Irishman, who started the day on one under, nine shots adrift of Wheatcroft, birdied three of the first eight holes.

A fourth birdie followed on the 12th as the world number two reached five under, but he bogeyed the 13th, 14th and 18th.

McIlroy made the cut by only one shot and postponed a scheduled trip to Haiti in his role as a Unicef ambassador to enter next week's Texas Open as a final tune-up for the Masters.

"I ended up thinking to myself, OK, let's just do for these next couple of weeks what's best for me," said McIlroy. "What's best for me right now is competitive golf and playing rounds.

"Everything feels good in my game; it's just about playing a bit more competitive golf and just getting a little sharper. I feel a little rusty out there at times.

"Unicef was great about it. I'm a big supporter of what they do all over the world. Hopefully, I can make it up to them in some way."

Wheatcroft looked set to join Haas and Cink in the lead but shanked a greenside bunker shot on the last to finish with a bogey that dropped him to 10 under.

Cink, who has not won a PGA Tour tournament since becoming Open champion at Turnberry in 2009, hit four birdies in six holes around the turn as he jumped up the leaderboard.

South Africa's Louis Oosthuizen, who won the 2010 Open, sank seven birdies in a bogey-free 65 to join Westwood and seven others on nine under.

Englishman Brian Davis is on his own in 16th place but is just three shots off the lead on eight under after a round of 71 that contained five birdies, two bogeys and a double bogey.

Compatriot Greg Owen is also in contention after a four-under-par 68 took him to seven under.

Phil Mickelson, striving to win a fourth Green Jacket in the Masters in a fortnight, also made strides up the leaderboard with a five-under-par 67 that featured seven birdies and two bogeys and took him to six under.