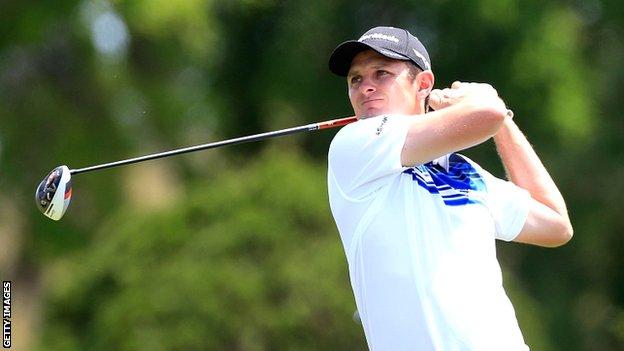 Justin Rose bogeyed the final hole to drop back into a share of the lead with Bill Haas at the halfway stage of the Arnold Palmer Invitational in Florida.

Rose, two ahead overnight, had four birdies but his late blemish resulted in a 70 and a nine-under-par total.

Tiger Woods, who can regain the world number one spot with victory this week, got within one of the lead but bogeyed the last three to finish four adrift.

Haas had set the pace at nine under after posting a 66 in the sunshine early in the day, but Rose eclipsed him with a comfortable two-putt for a four at the par-five 12th, his third birdie of the round.

Playing partner Woods, seeking his eighth professional victory at Bay Hill, began the day four behind Rose but eagled the sixth after a majestic iron shot to six feet.

The 37-year-old defending champion wasted the chance to move within two of the lead when he missed from inside three feet but atoned at the next with a delightful 10-footer into the centre of the cup.

The deficit became one when Rose dropped back to nine under after missing from inside four feet at the 14th and the Englishman needed to hole from more than twice that distance to salvage par at the next.

But at the par-five 16th Woods, who eagled the hole in round one, took six having driven into a fairway bunker and found the water with his second shot.

Rose birdied the hole after confidently two-putting from the edge of the green, before Woods dropped another shot at the 17th after missing the green and chipping back past the flag into the rough off the other side of the putting surface.

As the rain began to fall, Woods was wayward again at the 18th and failed to get up and down from 30 yards short of the green.

Rose three-putted for his second bogey of the day but reflected calmly: "In the grand scheme of things it might be absolutely irrelevant. The weather changed and it got a bit flat out there."

Former US Open champion Graeme McDowell was two over after a 74, but Open champion Ernie Els missed the cut after a second successive 75 left him at six over.

Four-time major champion Mickelson had three sevens, two of them triple bogeys, in a disastrous 79 for an eight over total.

World number four Brandt Snedeker is another to have the weekend off after dropping five shots in two holes en route to a 76 which also left him at plus eight.