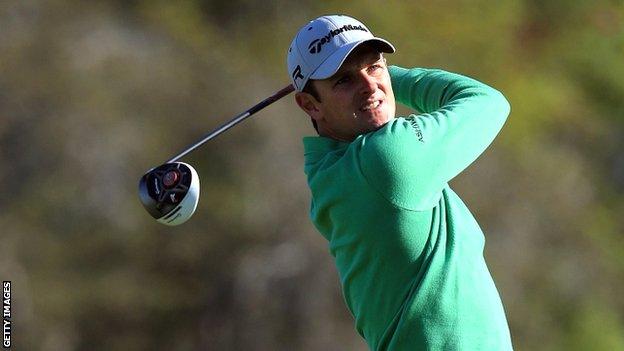 Justin Rose carded six birdies and an eagle in a seven-under-par 65 to take a two-shot lead over John Huh on day one of the Arnold Palmer Invitational.

The world number five, 32, who was fourth and eighth in his first two PGA strokeplay events of 2013, had four successive birdies on his inward nine.

Tiger Woods, who can regain the number one spot from the absent Rory McIlroy by winning this week, began with a 69.

Defending champion Woods, who has spent a record 623 combined weeks as world number one, was last top of the rankings in October 2010 but has already recorded two victories this year, at Torrey Pines in January and in last month's World Golf Championship in Doral.

We all know it's about consistency and that's what I'm still working toward. It's just fun to know that I obviously can do it, and I take a lot of confidence from that

The 37-year-old American has won seven times professionally at the Bay Hill Club and Lodge lay-out in Orlando, and also claimed the 1991 US Junior Amateur tournament at the course.

He began his round at the 10th and moved to three under with an eagle at the 501-yard par-five 16th, his seventh.

Woods, who won the last of his 14 majors in 2008, then ran up successive bogeys but three consecutive birdies on his inward nine took him within four shots of Rose.

"I certainly didn't play my best, but I got around and made a few good saves out there," he said. "I got a lot out of this round, and I threw away a few shots as well."

Rose, who ranked a lowly 128th in putting statistics last year and is 127th thus far in 2013, took only 25 putts on day one at Bay Hill and said: "Today was probably the first real hot day I've had with the blade in a long, long time. That's been the error of my game since June last year.

"We all know it's about consistency and that's what I'm still working toward. It's just fun to know that I obviously can do it, and I take a lot of confidence from that."

Four-time major winner Phil Mickelson twice drove into the water, holed from 12 feet to eagle the 16th, then missed from inside four feet to drop a shot at the last in a mixed round of 73.

Masters champion Bubba Watson had two double bogeys but birdied the last to finish with a 74, while world number four Brandt Snedeker took a triple bogey six at the par-three 17th en route to a 76.