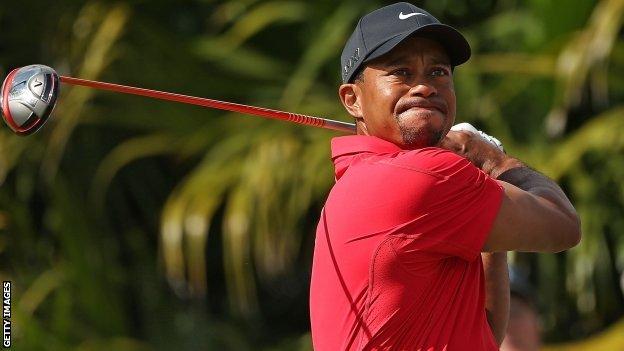 Tiger Woods will not be satisfied if he returns to the world number one spot with a victory at this week's Arnold Palmer Invitational in Florida.

The American, 37, who is the defending champion and has won the event seven times, will replace Northern Ireland's Rory McIlroy who is not playing.

"I don't want to be as good as I once was, I want to become better," he said.

"Golf is a notoriously difficult game to predict but history suggests this will be a stellar season for Woods.

"He has won twice in 2013 at two of his favourite venues - Doral and Torrey Pines. It is the fourth time he has collected this early-season double and each time previously Woods has gone on to win big.

"In 2005 he claimed six titles, including the Masters and the Open. The following year he won eight times with triumphs at the Open and PGA Championship and in 2007 he collected another PGA crown among seven victories."

Woods has won two of the four events he has played in this year - winning the World Golf Championship event, two weeks ago at Doral, to add to his victory at Torrey Pines in January.

And he goes into this week's Bay Hill tournament - which starts on Thursday - as favourite to win a third event of 2013 as he continues his build-up to the first major of the season, the Masters at Augusta in April.

"Just got to win this week, not too complicated," said Woods.

"Things are still becoming more efficient. You know, these two wins I've had this year have been built [on] some nice leads, which means I've played really well and things are starting to come around and become more efficient day in and day out."

Golf legend Palmer, who won seven majors between 1958 and 1970, believes Woods is back to his best.

The 83-year-old American told the Golf Channel: "He looks probably as strong and as good from a golf perspective as I've ever seen him.

"I think his swing and his posture and his attitude is far better than it's been in some time, and it takes me back to when I first played with him at Augusta when he was a rookie."

Woods begins his opening round alongside South Africa's Open champion Ernie Els and England's Justin Rose, with the trio teeing off on the 10th at 12:05 GMT on Thursday.

Northern Ireland's Graeme McDowell, runner up to Woods at Bay Hill in 2012, also tees off on the 10th, with England's Ian Poulter and American Keegan Bradley, in the group behind Woods.