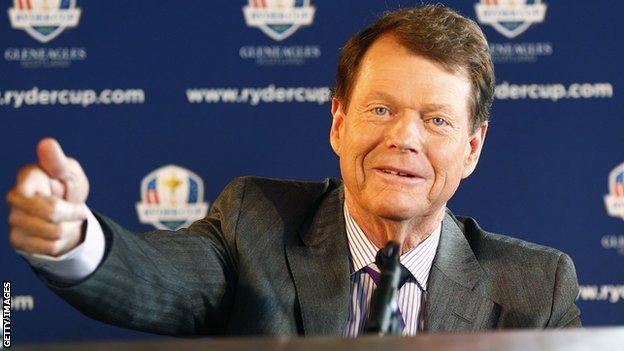 United States Ryder Cup captain Tom Watson has cut his number of wildcard picks from four to three for the 2014 tournament at Gleneagles in Scotland.

The 63-year-old will include the nine top-ranked players as the US try to win their first Ryder Cup for six years.

"There's not a lot of method in my madness, but I think the players ought to have another shot of getting on the team by merit," Watson said.

Watson, who captained the US team the last time they won in Europe at the Belfry in 1993, said he consulted 2012 captain Paul Azinger before making the decision to cut his number of picks.

"I ran it by three or four recent captains, we had long conversations about it and all of them said it was a good decision," said the five-time Open champion.

"I talked with Paul and he was behind it 100%. He had some good thoughts about how he comprised the team and what he did with the team to get them some ownership in the process."

The points system to determine the US team for the event in September begins on 14 April, after the 2013 Masters.

Irishman Paul McGinley will captain Europe and will have two wildcard picks.