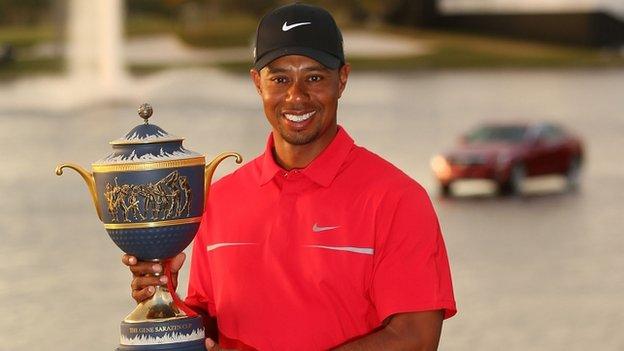 Tiger Woods wrapped up a dominant win at the World Golf Championships tournament at Doral with a two-shot victory over Steve Stricker.

Graeme McDowell's day fell apart on the back nine and the Northern Irishman tied for third with Adam Scott, Sergio Garcia and Phil Mickelson.

It was the second win of 2013 for Woods and moved him closer to Rory McIlroy's number one spot in the world rankings.

McIlroy made up eight strokes on the final day to finish joint eighth.

"Tiger Woods has won twice in 2013 at two of his favourite venues - Doral and Torrey Pines. It is the fourth time he has collected this early-season double and each time previously he has gone on to win big."

"I'm quite happy with where my game is at compared to where it was at the start of the week," McIlroy said.

"There is quite a bit to go, but scores like today and shots like that over the last three days definitely give me confidence. I'm a lot happier for the next few weeks."

But the weekend belonged to Woods, who led the event from day one and made few mistakes on his way to a 17th WGC title.

"I played well this week," said Woods, who carded a one-under-par round of 71 to finish on 19 under.

"It was one of those weeks where I felt pretty good about how I was playing."

McDowell went into the final round as Woods's closest rival four shots behind but a messy day saw his challenge fade.

The world number 19 mixed four birdies with two bogeys but a double bogey on the 18th saw him drop back to a share of third on 14 under.

"I did everything I had to do but I wasn't putting with the same authority as I was earlier in the week," McDowell explained.