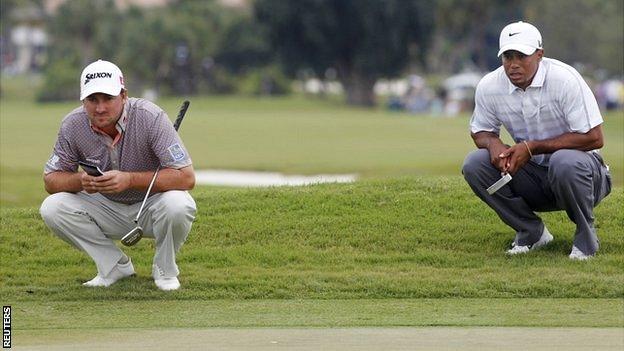 Tiger Woods takes a four-shot lead over Northern Ireland's Graeme McDowell into the final round of the World Golf Championships tournament at Doral.

McDowell closed the gap to a single shot as he holed an eagle and two birdies on the front nine.

But Woods pulled clear at the turn as McDowell marred his round - which included a second eagle - with a double-bogey at the 14th.

The American will resume on 18 under as he closes in on his second win of 2013.

Tiger's going to be a tough guy to catch but with tough conditions hopefully we'll have a chance.

Woods wants to regain the world number one spot from Rory McIlroy, whose sticky patch of form showed no signs of abating in Miami.

He said: "It's important to be playing well especially if the wind is going to blow like it is.

"I'm excited about the way I'm playing, hitting the ball well, making some putts, and this golf course is getting tricky.

The 14-time major winner put himself in a commanding position at the Blue Monster course, carding seven birdies and only two bogeys.

A tee-shot that got stuck in a palm tree was about the only thing that went wrong for Woods on Saturday.

There was less luck for McDowell as a bogey at the 11th and a double-bogey six two holes later ruined a promising early start.

McDowell clawed back some ground when he chipped in from 20 feet for an eagle at the 16th but he failed to take advantage of Woods's error at the 17th when his birdie putt stayed up.

The Northern Irishman said: "Tiger's going to be a tough guy to catch but according to the forecast, we are going to have strong winds.

"I think that's an advantage to the rest of the field, because benign conditions, the way he looks like he's playing, 67, 68, he's going to be a tough man to catch. But with tough conditions hopefully we'll have a chance."

Phil Mickelson and Steve Stricker ended the day sharing third place after each shooting 69 to finish 13 under.

Justin Rose and Ian Poulter were the leading British players at six under as fellow Englishman Lee Westwood fell away late in his round.

Westwood dropped to a one-under-par 71 and will resume on three under alongside world number one McIlroy.