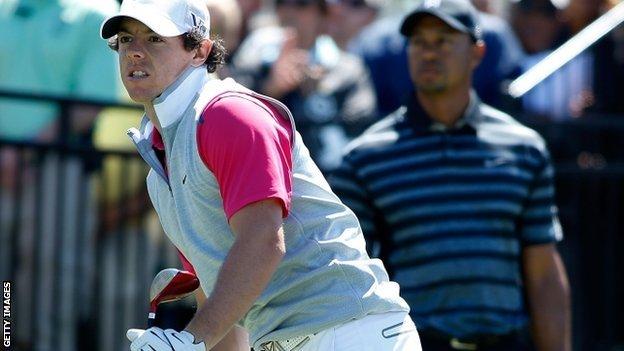 Rory McIlroy shot a one-over-par 73 in the World Golf Championships event at Doral in his first round since his high-profile walk-off last week.

The world number one, who pulled out midway through the second round of the Honda Classic last Friday, finished seven shots behind leader Tiger Woods.

It was a bit of a struggle to be honest

"It was a bit of a struggle to be honest," said McIlroy, who made six bogeys but eagled his 10th.

Playing partner Woods hit nine birdies for a share of the lead.

It was the best opening round from Woods since the BMW Championship in September, but he felt it could have been even better.

"It was certainly a day that could have been a little bit lower," he said.

"This is probably the easiest wind we'll have. Some of the hardest holes were playing downwind and it really wasn't blowing that hard most of the day."

The world's top three players - McIlroy, Woods and England's Luke Donald - were grouped together over the Miami course.

McIlroy, 23, was thankful for an eagle at the 10th but conceded he was still searching for something approaching his best form.

The Northern Irishman found just three of 14 fairways on the Blue Monster course.

"Hit some good shots, hit some not-so-good shots," he said. "As I've been saying all week, this is a work in progress and I'm working at it and I'm staying patient.

"I've got another three rounds here to try and work on it a bit more and shoot a few good scores and we'll see what happens."

Defending champion Justin Rose of England was one of six players two strokes back along with compatriot Ian Poulter after shooting a 68.