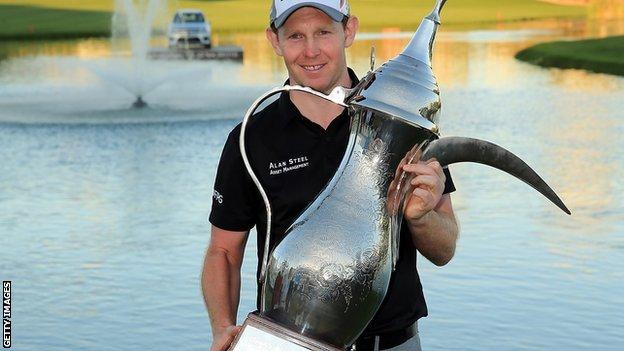 Gallacher, 38, made an eagle at the 16th in his one-under-par final round of 71 to end on 22 under, three shots ahead of South African Richard Sterne.

Chile's Felipe Aguilar and Denmark's Thorbjorn Olesen came third on 17 under, with England's Lee Westwood and Australia's Marcus Fraser on 16 under.

"He has always been one of the best ball strikers on Tour and this victory should prove the launchpad for his 2013 season. It certainly continues an upward trend from encouraging results towards the end of last year.

"Lee Westwood will feel frustrated that his short game under pressure was not strong enough to sustain what might have proved a serious challenge."

"I didn't realise it is 201 tournaments since my last victory, but now I have got it, it is even sweeter," said Gallacher.

The Scot held the lead at the start of the day after registering his best ever European Tour round on Saturday when he shot a 10-under-par 62.

However, he missed a four-foot par putt on the first hole on Sunday and also bogeyed the second, with Sterne, who had been in front at the end of both of the first two days' play, now sharing the lead.

But Sterne dropped four shots in six holes from the 11th to 16th and Gallacher's eagle on the 16th led to him lifting the trophy.

His victory is now expected to move his world ranking from 111 to 60, which would qualify him for the WGC-Accenture Matchplay Championship. A good performance there and he could qualify for the US Masters.

"That would be something," said Gallacher. "The Masters is the only Major I haven't played and I have always watched it on TV.

"But this win certainly changes my schedule and I am very happy about that."

Westwood made a birdie at the seventh in his four-under-par round of 68 to finish joint fifth with a 16 under total of 272.

Fellow Englishman Robert Rock, winner of last year's Abu Dhabi Championship, shot a 68 and moved into a tie for seventh place at 15 under, along with Portugal's Ricardo Santos and England's Steve Webster.