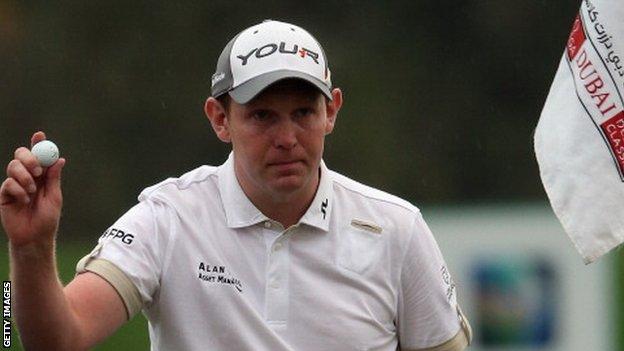 Scotland's Stephen Gallacher achieved his best ever European Tour round with 62 and a last-hole eagle to take a three-stroke lead in Dubai.

His 40-yard bunker shot put him three strokes ahead of South African Richard Sterne with the lowest 54-hole total in the tournament's history at 195.

Gallacher, the nephew of former Ryder Cup captain Bernard, is attempting only his second Tour win in nine years.

In a spectacular round, Gallacher holed two eagles, the first at the long 13th, and six birdies.

Gallacher said: "It's the best round I've had, I was just trying to make as many birdies as I could. I'm pretty familiar with this course - I come out here on holiday with the family."

Of his last hole eagle out of the bunker, Gallacher said: "It came out perfect and obviously it went in, a great way to finish."

Despite losing his lead Richard Sterne, said he was "happy" with his round. He had scored a strong 62 on the opening day and led by one stroke after each of the first two rounds, but bogeyed the first hole before recovering to play seven birdies, six of them in the last 12 to finish on 66.

England's Tommy Fleetwood went around in 69, five adrift of the leader, while compatriot Steve Webster scored a 65, one stroke behind.

Four years ago Gallacher, the former Scottish and European amateur champion, had to return to the Tour qualifying school during a battle with the viral infection sarcoidosis that affected his lungs and joints.

Victory in the tournament would see him rise from 111th on the world rankings into the top 60 for the first time and then possibly put him in contention for a top-50 place that would qualify him for the US Masters.