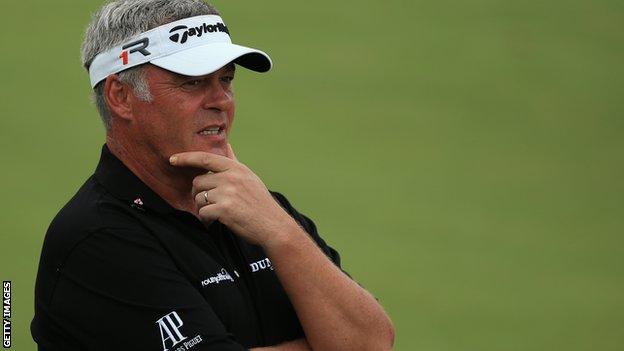 Darren Clarke admits he is "still wrestling" with the possibility of captaining Europe in the next Ryder Cup in 2014.

Colin Montgomerie and Paul McGinley have been linked to the role along with the 2011 Open champion.

"As much as I would dearly love to be captain, this may not be my time," said 44-year-old Clarke.

"I'm still wrestling with it. It's a tough one for me, but to be honest I want to play golf."

A meeting in Abu Dhabi next Tuesday will decide who will lead the European team when they defend the trophy at Gleneagles in 2014, against an American side who will be captained by Tom Watson.

"Whenever I was initially mentioned [as captain] I wasn't playing very well," said Clarke.

"But I played much better at the end of last year and have been thinking long and hard about it all over the Christmas break.

"I won one of the biggest prizes in golf by winning The Open and I am exempt for another three years (in the States).

"If I was given the opportunity to do the captaincy I'd effectively be throwing two of those years away."

Clarke carded a 68 to move to one under par after two rounds of the Volvo Golf Champions in Durban, South Africa.