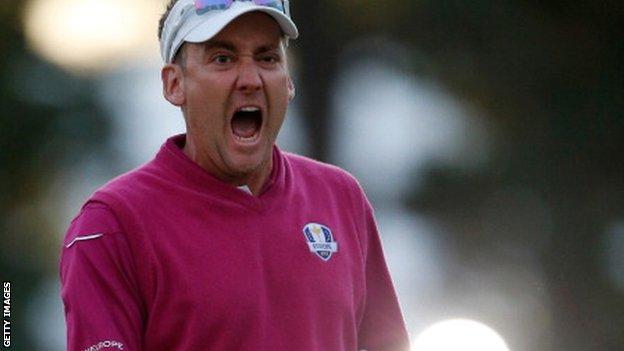 Europe's Ryder Cup talisman Ian Poulter has said he feels unfulfilled and believes he should have won more golf tournaments during his 17-year career.

The Englishman, 36, admits the "body clock is ticking" but is confident he can add to his 16 tournament wins.

"I could and should have won a lot more," Poulter told BBC Radio 5 live.

Poulter, the world number 12, was one of the inspirational figures behind Europe's final-day comeback victory in September's Ryder Cup.

The Florida-based golfer, in partnership with Rory McIlroy, birdied the last five holes to snatch a vital point from Jason Dufner and Zach Johnson to ensure Europe were only four points behind going into the final day.

Poulter, who won his four matches in Medinah, said the unlikely Ryder Cup win surpassed anything he had achieved on a golf course.

"Those moments don't happen very often and they are life-changing moments," said Poulter.

"I holed the putt [on the 18th on Saturday] and turned to the team and saw a different team.

"For them to respond the way they did was truly inspirational. It will continue to inspire me for years to come.

"It's something I'm really proud of, my achievement in the Ryder Cup. It goes way past the money aspect. It's straight from the heart."

The father-of-three secured his first win of the year at the WGC Champions in Shenzhen last month, taking his tally of PGA Tour victories to two.

He has yet to win a major, but admitted winning one of the sport's most prestigious prizes was "very hard to come by".

Poulter was second behind Padraig Harrington in the Open at Royal Birkdale in 2008 and was tied third behind Rory McIlroy in the US PGA Championship at Kiawah Island in August.

"I will be doing everything in my power to get one [a major] as soon as possible," he said.

"I'm proud of what I've been able to achieve, to be able to provide for my family.

"I'm going to enjoy the luxuries in life that this wonderful game has been able to give me and I should enjoy them, I've worked hard for them.

"It's been a long journey and hopefully the journey is going to continue."