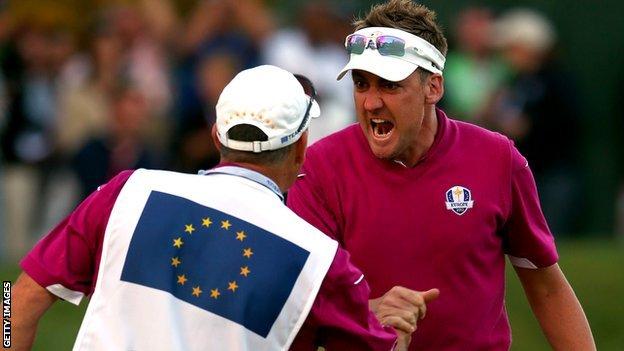 You can imagine the scene. The boy's eyes were bulging, his teeth and fists were clenched and he just could not think about losing.

They were only play fights when there was nothing better to be done by a pair of brothers, a typical sibling scenario, but this one involving the Poulter brothers of Hitchin spawned one of golf's truly great competitive spirits.

It is the most amazing adrenalin rush you can ever get. I can't equate it to anything else I have ever done

It is the tenacity of Ian Poulter that sets him apart in the ultra-competitive world of professional golf, particularly so in the Ryder Cup.

For so single-minded a sportsman, it is within the team environment that he prospers most. His is a self-made talent that doesn't only yield selfish spoils. Just ask his team-mates at Medinah this year.

"He gets so up for it that you feed off his energy. He makes his views very clear - he doesn't want to lose and he's going to do whatever he can to motivate the team.

"He obviously gets so inspired by the Ryder Cup and you can see that raw emotion in his face. His eyes almost pop out a few times a day and its good to see and good to be around."

Donald was speaking as part of a special tribute to Poulter to be aired on BBC Radio 5 live at 21:30 GMT on Tuesday 18 December.

His fellow Englishman's inspiration of the most unlikely of Ryder Cup victories sits comfortably alongside so many of the extraordinary sporting performances witnessed in 2012.

Poulter takes us back to his childhood when those competitive instincts that proved so valuable to European golf in September were first honed.

"Family life was fun," he told me. "In the early years I shared a bedroom with my brother. It was very much the brotherly love/hate relationship.

Until he was about 15, Poulter played a lot more football than golf. He was the man up front sniffing glory at every opportunity until he developed asthma and dropped back to centre-half.

Even so, he still made sure he took all the free-kicks and corners. "I had this competitive spirit in me," Poulter recalls. "I detested losing. I wasn't the best sportsman at school but I did most sports.

"I played cricket, basketball, pole-vaulting. I had a go at everything because I just really enjoyed sport, the competitive spirit of it and what a difference it made to me.

"Sitting in a classroom putting my head in a geography book, to be honest, really wasn't that interesting to me. But going out on an athletics field doing 100m hurdles or throwing a discus, that to me was a challenge.

"It was no surprise to me that I came through to do a sport - even though it wasn't football, my first love."

Poulter wanted to play for Arsenal and had trials for north London rivals Tottenham, but it didn't work out. By this time the golf bug had struck and at the relatively late age of 15 he decided his future lay in the game.

"I started working in a golf shop at Chesfield Downs [in Stevenage]. I was playing off a four handicap so I really wasn't much cop at that time. I won my club championship and that was really about it to be honest with you," Poulter said.

His real talent was a firm work ethic and the enthusiastic technique to earn commission on sales of golf equipment. Eventually he became an assistant pro.

"At that stage I always had the dream to become a golf professional," he says. "You could be an assistant off a four handicap, so I signed my handicap certificate card and sent it off to the PGA."

However, self-certification, enterprising as it is, is not the prescribed method so now he had to back up his claim that he was good enough to be a PGA pro.

"I passed my playability test in the first four events, opening up with rounds of 66 and 66," he says.

He was on his way, with a self-belief that has never left a player who now boasts a dozen titles worldwide including two World Golf Championships.

But, inspired perhaps by memories of the camaraderie of football dressing rooms, it is at the Ryder Cup that he has reached his peak - so much so that he was always going to be a wildcard pick for Medinah if he didn't make the team on merit.

And how Poulter justified captain Jose Maria Olazabal's faith by inspiring Europe's comeback from 10-4 down late on the Saturday afternoon in Chicago.

In partnership with Rory McIlroy he rolled in five consecutive birdies to snatch a vital point from Jason Dufner and Zach Johnson to ensure Europe were only four points down going into the final day and make what followed possible.

"Yes it is pressure packed and, yes, there is so much tension - but it is the most amazing slow walk and the most amazing adrenaline rush you can ever get. I can't equate it to anything else I have ever done.

"It takes you to a place I didn't know exists. It's very, very, very special."

And so too were the results his European team-mates subsequently produced.

It could be argued that, at Medinah, Poulter produced the greatest individual display the Ryder Cup has ever seen; what is beyond doubt is that he inspired one of the great eye-popping stories of an astonishing sporting year.

And, who knows, it might prove the bedrock for a maiden major success in 2013. Ian Poulter certainly won't lack the self-belief to get the job done if he creates the opportunity.