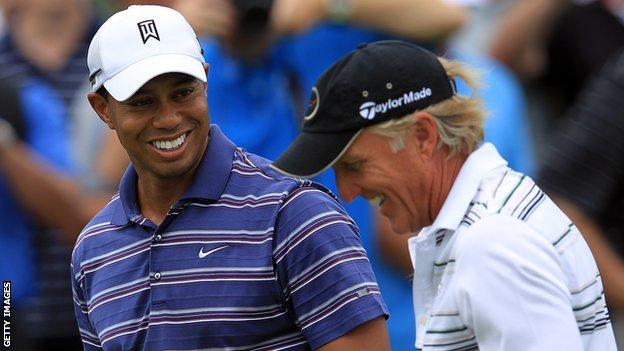 Woods has stayed on 14 major wins since his 2008 US Open success amid personal problems and injuries before showing improved form this year.

In contrast, world number one McIlroy has won two majors in two seasons.

"I think if anybody can break Nicklaus's record [McIlroy] could," said former world number one Norman.

When asked whether Woods was capable of winning the five majors he requires to pass Nicklaus, Norman replied: "I don't think so, no.

"Every year that passes by that he hasn't won a major it just gets that much harder to win a major.

"I don't care how many you have won, it just becomes more and more difficult.

"He might win one or two more but I don't think he will win the four or five more that he needs to break the record."

McIlroy won the US Open in 2011 and this year's US PGA Championship and Norman says the sky is the limit for the talented 23-year-old.

"So I will keep my fingers crossed for him because I would love to see that happen. Somebody will do it one day and it could be Rory.

Two-time Open champion Norman has one of his rare competitive appearances at this week's Australian PGA Championship at Coolum.