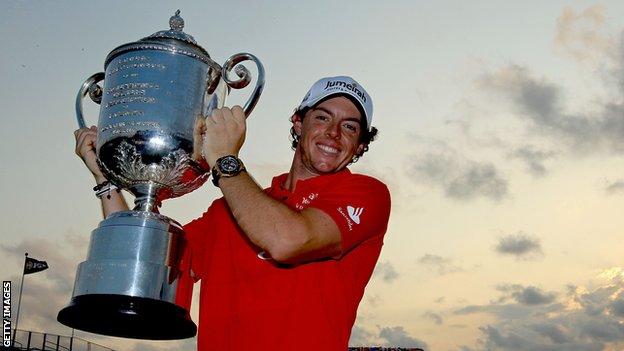 Northern Ireland's Rory McIlroy has been voted PGA Tour Player of the Year by fellow players on the US Tour.

World number one McIlroy won four events in the States in 2012 as well as the World Tour Championship in Dubai.

The 23-year-old, the youngest player to win the award since Tiger Woods in 1998, topped the money lists in Europe and the US and was also part of the victorious European Ryder Cup team.

He said: "It's a great way to end a great year and my best season so far."

The current US PGA champion added: "We are judged on wins ultimately. This year has been a great year with four wins on the PGA and winning in Dubai a couple of weeks ago."

McIlroy singled out his first major win at the US Open at the Congressional in June 2011 as the beginning of a new stage of his career, saying he changed his approach to preparing for tournaments afterwards.

He added: "I always felt I had been dedicated to the game. I practised hard and worked at it.

"Over the past 18 months after winning the US Open I felt I went to that next level, or next stage, of my career.

"That is the way you have to be, if you want to be successful."

American John Huh was named rookie of the year after becoming the youngest player in more than a decade to qualify for the Tour Championship.