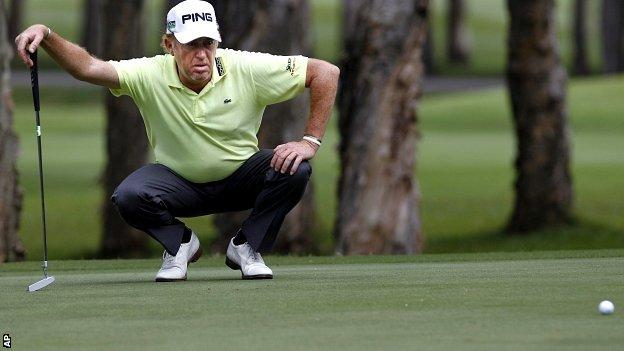 Spain's Miguel Angel Jimenez joined New Zealander Michael Campbell at the top of the leaderboard after round three of the Hong Kong Open.

Jimenez shot a bogey-free 68 to move to 10 under alongside Campbell, who carded a more uneven 69.

The 2005 US Open champion made an eagle on the first, but narrowly avoided a penalty on the 10th and made bogeys on the sixth and 11th holes.

World number one Rory McIlroy on Friday at five over.

It was hilarious, wasn't it? So funny

Campbell, 43, is trying to win his first tournament since the World Match Play Championship seven years ago, and needed to sink a 15-foot par putt at the last to retain a share of the lead.

The New Zealander had earlier accidentally knocked his ball off the tee at the 10th while taking a practice swing, but it was ruled that he had not addressed the ball so he was not penalised.

"I was practising my swing and teed the ball up, and as I practised my swing I knocked it off the tee. I knew it wasn't a penalty. JP (John Paramor, chief referee with the European Tour) was there and confirmed it.

"It wasn't an intentional swing, so I was allowed to replace the ball on the tee. It was hilarious, wasn't it? So funny.

"I knew the rules, but I wanted to double-check it. When JP walked towards me with a big smile on his face. I knew I was OK."

Jimenez is bidding to become the oldest player to win on the European Tour at 48, as well as going for this third Hong Kong title.

"I like this golf course," said the Spaniard. "I like to be in contention. On this course you have to have patience and let everything happen. And that's what's going to happen tomorrow, stay patient, because anyone can win."

Matteo Manassero moved into contention with a superb 64 as he looks to repeat last week's victory at the Singapore Open.

"Everything is coming together," said the 19-year-old.

"Last week really made me relax a lot on the golf course. These three rounds and my position coming into this Sunday are certainly due to what happened last week.

"I've got more freedom. I'm just more relaxed on the golf course and I take it the way it comes."