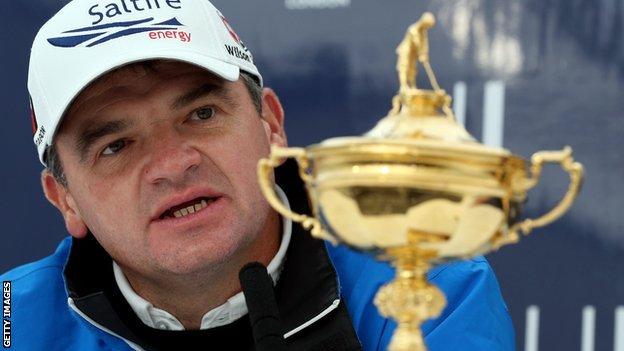 Europe secured 8½ points out of a possible 12 in the singles to clinch a 14½-13½ win over the United States.

"You could see that he believed we could win the Ryder Cup even from 10-6 down," Lawrie said.

"He believed we could all win, never mind 8 or 8½ points. When someone like him says that, it makes you think you can do it. And that is what we did."

Lawrie had been omitted from both sessions of foursomes and then lost in the fourballs, first with Swede Peter Hanson and then with Belgian Nicolas Colsaerts. However, the Scot comprehensively beat FedEx Cup winner Brandt Snedeker 5&3 in the singles.

Lawrie flew into Gleneagles by helicopter on Wednesday to hand over the Ryder Cup to the Perthshire course, which will host the 2014 tournament.

Lawrie, 43, is playing in this week's Dunhill Links event in Scotland, which has a pro-am format. The 1999 Open champion is competing alongside his 17-year-old son Craig, a scratch handicapper who caddied for his father at the Scottish Open in July.

Most of the star players start at Carnoustie on Thursday, then switch to Kingsbarns on Friday before playing St Andrews on Saturday.

Among the amateur golfers taking part are Hollywood star Bill Murray and the most successful Olympian of all time, swimmer Michael Phelps.