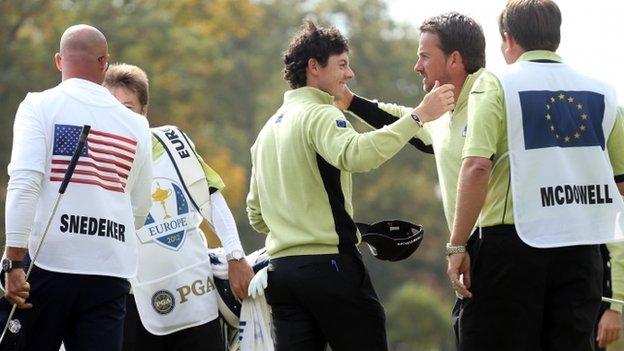 It was still too dark to make out the contours of the fairway ahead when the first shouts of "USA! USA!" echoed round the opening tee at Medinah on Friday morning.

By sunrise the two steep stands were packed. By the time you could actually see the trees all around against the dawn sky, the fans were four-deep along the ropes that stretched away towards the green.

There is a lot of hanging around and waiting at Ryder Cups, not only in the two long years between each competition but in the phoney war that is waged in the preceding days by nervous captains and misquoted players.

It means the first drive from the first tee in the very first match feels something like Christmas morning just after the parental signal has been given that present unwrapping can finally begin.

There is excitement, barely contained. There is drinking at a preposterous hour. There are wild shouts and tired eyes and tellings off from the sober ones in charge of it all.

There is also the clatter of nerves and the pounding of players' hearts.

As the opening pairings of Rory McIlroy and Graeme McDowell and Jim Furyk and Brandt Snedeker came over the dark green footbridge from the comparative calm of the clubhouse, they found themselves stepping into a bear-pit without parallel in their normally sedate sport.

European team captain Jose Maria Olazabal and his United States counterpart Davis Love III were there to greet them, their own arrivals having triggered another exponential exchange of "ole's" and "USA's" from the agitated galleries, cameras crowding in from all sides, hundreds of hand-held Stars and Stripes being frantically waved while a flag the size of a house snapped in the chill morning breeze up above.

It was as cold as Christmas too, the dew heavy in the grass and breaths hanging in the air, which ensured your own hands shook in sympathy even as you wondered how anyone could possibly get a straight drive away under such pressure.

Neither McDowell not Furyk could. One might have been the last-gasp hero at Celtic Manor two years ago, the other a 42-year-old veteran in his eighth Ryder Cup, but there can be no rehearsing these moments, no preparation for the adrenaline and stress hormone that flood the veins.

Between matches spectators' songs filled the silence. The prizes for creativity were won by the European contingent, even if the battle for volume was lost from the start.

Phil Mickelson drew the loudest roar of the day as he arrived with Keegan Bradley to take on Luke Donald and Sergio Garcia. Lee Westwood thundered down the footbridge's steps like a heavyweight rumbling into the ring. Michael Jordan, Chicago's favourite sporting son, strode out in support of Tiger Woods, the man who calls him his "big brother", to the sledge of the day: "GET IN THE HOOP!"

Woods needed all the assistance the gods could give him.

He mangled his opening drive almost to the Illinois state border, watched his partner Steve Stricker duff his iron off the second tee into Lake Kadijah and then bananaed his next drive out the other way.

The talisman's troubles tied to an early lead for the visitors in all four matches initially dulled the home crowd's fervour.

Around the 13th green, waiting for that first match to arrive, ready to test the old adage about driving for show and putting for dough, there were thousands perched on every vantage point - in the posh seats around the green, craning necks from beyond the grassy slopes at the back, along the footbridge across from the fairway and on the banks over the far side of great grey-green greasy Kadijah.

McIlroy and McDowell arrived three up, seemingly cruising, only for the 23-year-old McIlroy's gossamer chip from the back to slide on and on as if across bathroom tiles.

McDowell's par putt lipped out, Furyk sunk his from five feet and in that moment the atmosphere ignited.

Earlier in the week, McDowell had likened the sound of a home putt dropping to a bomb going off. The explosion of noise here carried across the rolling course and set off similar detonations in all three of the remaining matches.

Mickelson and Bradley stood away in the distance on the elevated tee just one shot up on Donald and Garcia - unbeaten in foursomes and one of Olazabal's bankers. When Mickelson slid home a birdie to double that advantage, the pair celebrated with clenched fists and bumped chests. In this of all years, be careful which banker you trust.

The big video screens around the course amplified the excitement and accelerated the American momentum.

As McDowell's drive found the water on 15, everyone else in every other room at golf's greatest house party instantly knew. Poulter pushed his par putt right to launch Stricker and Woods a lifeboat, and the roars reverberated again. The neighbours would have complained, had they not all been peering over the fence.

This is the magical, horrible hold of matchplay golf - every putt a killer, every drive a knee-knocker.

Furyk and Snedeker would grab that lifeline and haul themselves back into the match from nowhere. By the 18th tee they had levelled it up, knowing that the point won by Mickelson and Bradley and the lead held over Westwood and Francesco Molinari by Zach Johnson and Jason Dufner gave them the chance to send USA to lunch three points to the good.

Snedeker was the one to crack. His drive screamed left and his hopes went down the gurgler. McDowell's clutch putt from 10 feet a few minutes later stole back the point. Woods's continued malaise meant the two sides would end the morning locked together at two points apiece.

Nothing in golf can match it. And this was just the starter.