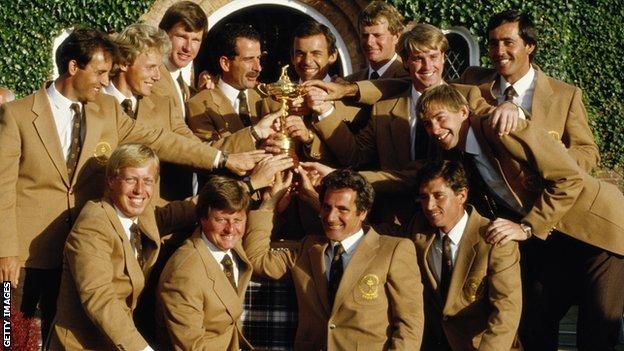 The 39th Ryder Cup, the biennial golf tournament between teams from Europe and the United States, begins at Medinah Country Club near Chicago on Friday, 28 September.

With the 2010 contest going down to the final singles contest and another close encounter on the cards, BBC Sport takes a look at 10 of the best moments in Ryder Cup history.

Two unofficial matches between Great Britain & Ireland - who preceded Europe as the team - and the United States had taken place in 1921 and 1926, with a seed-seller named Samuel Ryder in the gallery for the second.

When a member of the British team, George Duncan, said to Ryder that he wanted a regular, official match, Ryder donated a solid gold cup and made a sizable donation towards the £3,000 needed to send a team to Worcester, Massachusetts in 1927.

The visitors were robbed of team captain Abe Mitchell, whose figure adorns the top of the Ryder Cup, when he was struck by appendicitis, and lost 9½-2½.

GB & Ireland captain Ted Ray: "Our opponents beat us fairly and squarely and almost entirely through their astonishing work on the putting greens."

GB & Ireland were without a win since 1933 but went to Lindrick in Rotherham, South Yorkshire, with a team selected using a new points system.

The home side trailed 3-1 after the opening foursomes but, inspired by captain Dai Rees, roared back to win six of the eight singles matches to take the trophy 7½-4½. After losing for the first time in 22 years, the US would not be beaten again until 1985.

American Tommy Bolt, angry with the crowd after his 4&3 defeat by Eric Brown: "I guess you won but I did not enjoy it one bit."

Brown's reply: "And nor would I after the licking I have just given you."

GB & Ireland were heavily criticised for their 23½-8½ defeat in Houston, Texas in 1967, but recovered to contest the closest Ryder Cup in history at Royal Birkdale.

Seventeen of the 32 matches went to the final hole and, with one match remaining, the contest was tied at 15½-15½.

The Cup rested on the outcome of the tussle between Jack Nicklaus and Tony Jacklin, which was all square on the last green. Nicklaus holed a five-foot putt that left Jacklin a two-footer for a half and a share of the Ryder Cup. Rather than make his opponent hole out, in a tremendous display of sportsmanship, Nicklaus picked up the Englishman's marker, resulting in the tournament's first tie.

Jack Nicklaus: "I don't think you would have missed that putt, Tony. But, in the circumstances, I wasn't going to give you the opportunity."

After Great Britain & Ireland were hammered 21-11 at Royal Lytham in 1977, steps were finally taken to improve the competitiveness of the matches, with the rest of Europe invited to join Britain and Ireland.

Spaniards Seve Ballesteros and Antonio Garrido were the only two players from continental Europe to be picked for the 1979 event at The Greenbrier, West Virginia, though. The pair played in the first foursomes but could not affect the overall result, though, with the US winning 17-11.

Jack Nicklaus: "It is vital to widen the selection procedures if the Ryder Cup is to continue to enjoy its past prestige."

Tony Jacklin, captain in 1983, was invited to reprise his role in 1985 at The Belfry, leading a team that included five continental Europeans - more than ever before.

Ballesteros and fellow Spaniard Manuel Pinero won three points from four matches over the first two days, helping Europe to a 9-7 lead going into the singles, with Jacklin loading his strongest players in the middle of the order.

The tactic worked - Europe took 6½ points from the opening eight matches, with a tearful Sam Torrance completing a one hole win over Andy North to round off a 16½-11½ victory that handed the United States their first defeat in 28 years.

Tony Jacklin: "I didn't know where to be, what to do, what green to be on - it's going to take a long time for this to sink in, it was just fantastic."

Jacklin took his team to meet the Jack Nicklaus-led United States at the Golden Bear's own Muirfield Village course in Ohio.

Ballesteros was again at the fore for the Europeans, his partnership with debutant Jose Maria Olazabal earning three points to propel the visitors to a 10½-5½ lead.

The hosts fought back on the final day but, fittingly, it was Ballesteros who condemned the US to their first defeat on home soil with a 2&1 win over Curtis Strange, giving Europe a 15-13 victory and sparking celebrations that included Olazabal's dance across the 18th green.

Ian Woosnam, on Jacklin: "What this man has done today, he deserves a knighthood."

Amid the of backdrop the Gulf War, US captain Dave Stockton sought to maximise the sense of patriotism. At the pre-match dinner before the Kiawah Island tournament, a 40-minute film showing only American triumphs was screened, while Corey Pavin played wearing a Desert Storm cap.

It was a bad-tempered affair. Olazabal and Ballesteros had a row with Paul Azinger and Chip Beck over the latter pair's desire to change their ball, and Stockton failed to inform Europe captain Bernard Gallacher that Steve Pate had withdrawn from the singles through injury.

Everything came down to the final match between Bernhard Langer and Hale Irwin.

On the 18th, Langer had a six-foot putt to win his match and retain the Ryder Cup with an overall tie, but his miss saw Europe lose for the first time since 1983 as they went down 14½-13½.

Dave Stockton: "Most of the controversies were in Bernard Gallacher's mind - he saw suspicious happenings around every single corner."

With his side trailing 10-6 before the singles, US captain Ben Crenshaw asked the governor of Texas and future US President, George W Bush to address his players and saw them roar back to win the first six matches.

Now needing to beat America's Justin Leonard, Olazabal was four up at the turn but was pegged back to all-square going down the 17th.

When Leonard holed a 40-foot put for birdie, the green was invaded by most of the US team, who believed that would be enough to seal the Cup, even though Olazabal still had the chance to halve the hole.

As it was, the US did seal the biggest comeback victory in Ryder Cup history with a 14½-13½ win, but it was tainted by a supreme breach of golfing etiquette.

Jose Maria Olazabal: "When it was all over, I went to the locker room and almost every member of the team was crying. It brought us together, so that moment had its positives."

Captain Hal Sutton began his bid to regain the Cup by pairing Tiger Woods and Phil Mickelson together twice on the opening day. The move backfired, with them being beaten in both matches.

There was no way back for the home side and, with Sutton lurching from blunder to blunder, Europe had a massive 11-5 lead going into the singles.

Colin Montgomerie holed the winning putt as Europe recorded a winning margin of 18½-9½, America's heaviest defeat, and one that was matched two years later.

Hal Sutton: "I made mistakes and I take full responsibility for the mistakes that I made."

Heavy rain at Celtic Manor caused havoc, with Europe taking 5½ points from the two foursome and four fourball matches played on the Sunday to lead 9½-6½ ahead of the singles.

On the first ever fourth-day finish in Cup history, the United States mounted a singles comeback and, with one match to play, the scores were level at 13½-13½.

Europe captain Colin Montgomerie had one ace left in the form of US Open champion Graeme McDowell. As the ropes were lifted and players mixed with the gallery, McDowell birdied the 16th to go two up with two to play against Hunter Mahan. When the American duffed a chip on the 17th, the Ryder Cup was back in European hands.

Colin Montgomerie: "I didn't hit a shot, yet it is a proud, proud moment for me personally. It's an amazing feeling to have won."