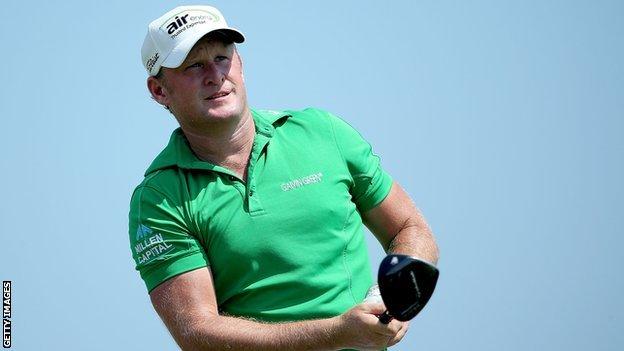 Jamie Donaldson believes he must win at least one of his next two events to have any hope making Europe's Ryder Cup team as a captain's pick.

The Welshman finished seventh at the US PGA Championship on Sunday, having won the Irish Open in July.

He sits well outside the 10 automatic qualifying places but hopes his fine run of form can continue and impress Europe captain José Maria Olazábal.

"I need two big finishes or one big finish to get a sniff," he said.

"It won't be guaranteed unless I won them both, I would have thought."

Donaldson banked almost £200,000 for his efforts in the US PGA at Kiawah Island, and won a considerable amount of ranking points towards the World Points List for Ryder Cup qualification.

But his 21st place ranking means he remains out of touch of the top places that guarantees a place in Europe's Ryder Cup team at Medinah, Illinois at the end of September.

The remaining two players will be selected by Olazabal, and BBC 5 Live golf pundit Jay Townsend believes Donaldson's recent performances puts him in the picture for one of those places.

The 36-year-old will stay in the US to compete in this week's Wyndham Championship at Greensboro, North Carolina, before returning to the European Tour for the Johnnie Walker Championship at Gleneagles later in the month.

The latter event concludes the qualification process for the Ryder Cup, and Olazábal's two selections will be announced on the final day.

Donaldson's top 10 finish at the US PGA will have caught the captain's eye, and the Welshman said he relished competing against the world's best on the big stage.

"It was fantastic. I played really well [from] start to finish," he said.

"It was my second US PGA. Last year I missed the cut, this year obviously I did a lot better.

"It was great to play with [Ian] Poulter and [Graeme] McDowell on the last day and finish seventh overall.

"I was trying to finish as high as possible to get as much world ranking points as I could, really.

"That's what it's all about. We need to get those points up so we can fly up the world rankings list, really, so that's what I was mainly thinking."

Donaldson's win at the Irish Open in July was his first on the European Tour, and secured him a place at the fourth major of year and the preceding WGC tournament.

He said: "It was great, it was long overdue and when it finally happened it was fantastic and it was a great place to do it.

"It's opened a few doors. We've got into a few tournaments because of it so we're just looking forward to the rest of the season."