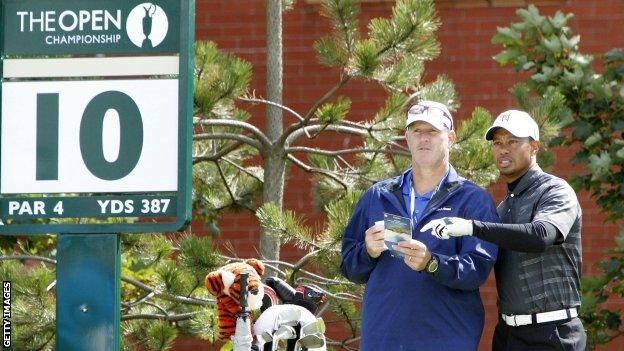 Tiger Woods believes the Royal Lytham rough is the toughest he has ever faced as he prepares for the Open.

"It's just that you can't get out of it. That bottom six inches, in some places is almost unplayable," he said.

"I've never seen the rough this high or thick and dense."

Defending Open champion Darren Clarke described the rough at Royal Lytham as "brutal", adding: "If you start spraying the ball around this week, you might as well go home."

Clarke added: "There could be some lost balls in there, even with spotters and everything.

"There's a really huge premium on accuracy this week. There's no chance coming out of this rough at all."

And Royal Lytham professional Eddie Birchenough admitted that the rough on the championship course was "just brutal", warning "you could lose your feet in there, not just the ball."

Woods, whose most recent of 14 major titles was the 2008 US Open, insists that the course is "fair" and that good scores are still possible.

The 36-year-old admitted though that the potential round-wrecking consequences of straying from the fairway, combined with forecast showers on Thursday, could prompt him to go on attack.

"If it's calm, we can shoot some good scores. If it's wet, lush, you've got to be more aggressive."

"I tried not to hit any out of the rough today but I will for the rest of the week," said the 2011 USPGA champion.

"It's very spotty. One foot to the left, you are hitting in to the green; another foot and you are chipping out to the fairway. It's a flip of the coin whether you're going to get a good lie or not."

Birchenough explained that the unusually wet summer had contributed to the testing conditions.

"The last two Opens we have had here the weather has been absolutely benign and the ball has been running miles and we have not had much rough," he said.

"This year with the recent wet weather we have a course that is playing a little softer and therefore a little wider, but should you go a little wider than that the rough is just brutal."

But the Championship organisers claim they have canvassed opinion from several professionals who are satisfied with the course.

"A large number of players have expressed how pleased they are with the course set-up, which seems to be very positive," said R&A communications director Malcolm Booth.

"The weather we have had, unprecedented in this country, means there has been a lot of moisture and rain which, combined with at least some summer heat, has led the rough to be very thick in places."

The depth of the rough at the Open has caused controversy before with Carnoustie, dubbed 'Car-Nasty' on its return to the rota in 1999.