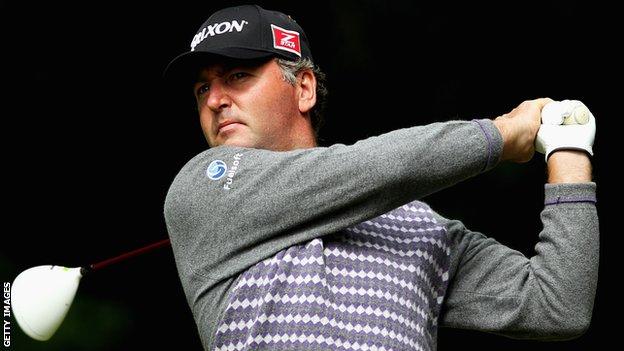 Raymond Russell has targeted a return to the main European Tour after putting illness behind him to win the Challenge Provincia di Varese in northern Italy.

The 39-year-old Scot finished one shot ahead of Argentine Daniel Vancsik to win his first Challenge Tour title.

"Obviously it puts me up the order of merit, which I'm trying to finish in the top 10 to get a card for next year on the European Tour," he said.

A debilitating virus kept Russell out of action for the whole of last year.

That came after the Edinburgh golfer, who had played on the main tour from 1995 until 2006, had earned his full card via the 2010 Challenge Tour rankings.

But, in his previous six events this season back in the second tier, his best finish was 23rd and he ended the previous week's Scottish Hydro Challenge at Spey Valley in a lowly 53rd.

"I feel like I've been playing well the last two or three weeks," he told BBC Scotland.

"I've been having spells, like the first 27 holes in Scotland I went bogey three and let it slip on the Saturday.

"But, in the last two or three weeks, I've starting playing better and I knew I wasn't too far away from putting it all together and playing well."

Russell, whose only other tournament victory came at the Air France Cannes Open in his rookie season on the European Tour, began the day three shots clear.

A final-round three under par 67 took him to 17 under and kept him ahead of Vancsik despite the Argentine piling on the pressure with a 64.

Russell, who now lies sixth in the Challenge Tour order of merit, was pleased to kept his game together sufficiently to lead from day one.

"I'm very happy with the win," he said. "I played very good all week, I played solid all week and only had three bogeys all week.

"So that was the plan at the start of the week and I managed to pretty much stick to it.

"It makes me exempt for the Challenge Tour for, I think, a year.

"Does it make up for missing last season? Not really, because it's one tournament and I missed a whole year. But it helps.

"Hopefully this is the start of many more good weeks and a good run of form for me."

England's Gary Lockerbie had a final round of 65 to finish in a tie for fifth, leapfrogging Magnus A Carlsson into top spot in the Challenge Tour rankings.