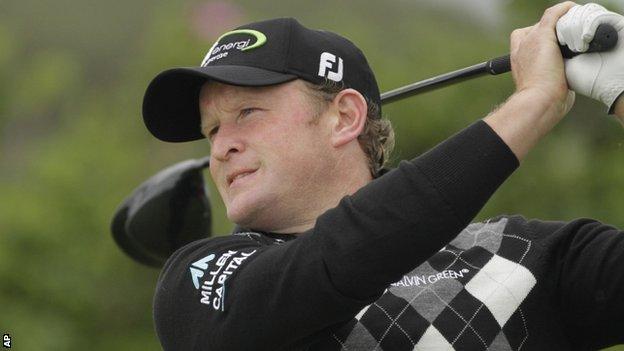 Jamie Donaldson hit a third-round 69 to take a one-shot lead at the Irish Open at Royal Portrush.

The Welshman, without a European Tour win in 244 starts, moved to 12-under to lead from England's Anthony Wall.

Frenchman Gregory Bourdy, fell well off the pace after shooting an eight-over 80.

Ireland's Padraig Harrington and England's Mark Foster are two shots off the lead, while Rory McIlroy's 71 leaves him on six under par.

Donaldson said: "You've got to keep trying and it's one shot at a time, one hole at a time.

"The only person I am playing against, I suppose, is myself. I've got to stay out of my own way.

"Obviously Padraig Harrington is a class player, but it's me versus me really."

The field will return for the final round on Sunday, with Wall looking for a first win in 364 tournaments.

The 37-year-old, who is staying at a caravan park, called his 67 "probably the best round I've ever played".

"It's quite a posh caravan - it's got running water, it's got gas," said Wall.

"I didn't want to stay in town because it was going to be quite boisterous.

"I knew we would have a bit of fun and it's been nice to relax. Half the time you seem to be on your own and you're sort of killing time."