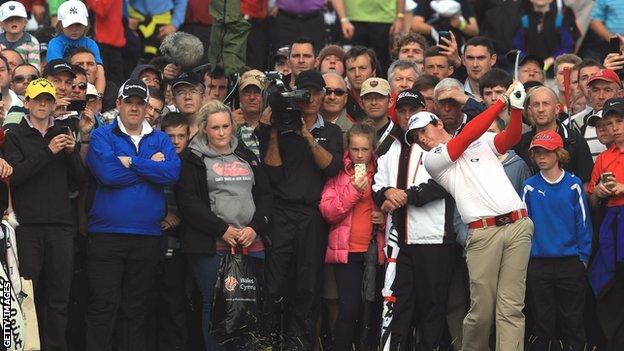 The spectators came to Royal Portrush in their thousands to watch Northern Ireland's illustrious trio of recent major champions in action.

And former US Open winners Rory McIlroy and Graeme McDowell and current Open champion Darren Clarke did not disappoint the huge galleries as they showed glimpses of the form that has propelled them to global stardom.

The enthusiasm of a golfing public starved of professional tournament golf could not be faulted as the car parks around the north coast filled up from early morning to take advantage of the park and ride facility, while others made use of the special train services.

The persistent rain did little to dampen the spirits of the expectant fans and the spectacular backdrop of the Atlantic Ocean provided a stunning setting to compliment a course rated as one of the best in the world.

'On the tee from Northern Ireland...Graeme McDowell,' came the familiar refrain, as a man who needed little introduction in these parts walked onto the 10th hole to begin his campaign for Irish Open glory.

The Rathmore man went on to record an opening 71 in improving conditions as the early showers started to clear and the lightly fluttering sponsors' flags indicated little breeze for the players to contend with.

But it was obvious who the main attractions were as the largest followings were inevitably reserved for McIlroy, McDowell and Clarke.

The local golfing public were determined to make the most of a rare opportunity to watch the cream of Northern Ireland's homegrown talent and belatedly acclaim their remarkable run of major successes.

Appreciative applause greeted the other players in the field, but the appearance of the celebrated trio provoked a rapturous reception as they strode onto the tees and greens around the famous Dunluce seaside links.

It was all a far cry from the days when the three strutted their stuff as promising amateurs at the North of Ireland Amateur Championship, McIlroy carding a course record 61 as he lifted the title in 2005.

Five years later, McDowell would return to the nearby Rathmore Golf Club after securing the US Open title and in July 2011 the clubhouse in Portrush would provide the setting for Clarke's emotional homecoming after his hugely popular victory at Sandwich.

Anticipation mounted as world number two McIlroy prepared for his afternoon tee-off and an extra buzz of excitement was evident as news filtered through that his tennis star girlfriend Caroline Woznaicki had arrived following her first round defeat at Wimbledon the previous day.

The popular Dane received a generous reception as she emerged from the clubhouse wrapped up against the elements in a woolly hat and waterproofs.

McIlroy, now one of the most recognisable faces in world sport, followed soon after, walking in his familiar jaunty style, and greeted by, among others, a couple of fans wearing curly black wigs in honour of their hero.

Massive advance ticket sales had ensured that the first Irish Open to be staged at Royal Portrush since 1953 would be a sellout affair for all four days of competition and the best supported event on the European Tour this season.

The grandstands and fairways were thronging with a sea of colourful coats, sweaters and umbrellas, and none more so than when the 23-year-old from Holywood began his challenge as the galleries lay 10 deep in some places.

It was obvious that this event had captured the public imagination in a big way and its appeal stretched far beyond the regular golfing fraternity.

The tens of thousands strategically navigated their way round the 18 holes, tramping through the greenery, up hill, down dale and over the crossing points in a bid to grab the best possible vantage points.

And it wasn't just locals who had made the journey as a variety of accents revealed visitors from the Republic of Ireland, The United States of America and New Zealand, among others.

The better-than-expected weather kept everyone in good spirits as sunny skies predominated, at least until mid-afternoon when play was halted for 90 minutes, amid fears of lightning.

The delay provided fans with an extra opportunity to enjoy the relaxed surroundings of the impressive tented village, which hosted a variety of eating places, merchandise stalls and the sizeable media centre.

Souvenir hunters ensured brisk business and fans were keen to catch a flavour of the special atmosphere as burgers, fish and chips, hog roasts, ice cream, crepes, paninis, steaks and hot and cold drinks were all consumed with relish.

Those who wanted to take a break from the action congregated in front of the specially erected big screen which transmitted pictures of the best of the day's play.

The hospitality marquees added to the atmosphere of all that one would expect to surround a professional sporting event and a showcase for Northern Ireland sport.

Meanwhile, in the busy media centre, rows of journalists were relaying the action to the wider public, local scribes mingling comfortably with the international European Tour regulars.

Television gantries peppered the skyline, buggies transported anyone who looked important or had a job to do, and children queued for signatures at the specially designated autographs area.

Months of preparation and hard work had paid dividends as the course had been transformed and conditioned into a major sporting venue.

In the short term, the decision to stage the event at the north coast course appears to have provided a much-needed boost to the fortunes and profile of the recently ailing Irish Open.

In the longer term the number of young people in attendance would indicate a new generation keen to emulate the feats of McIlroy, McDowell and Clarke.

And as an audition for a possible staging of the Open Championship, this is certainly a move in the right direction.

Last year the Royal and Ancient made promising noises about 'taking another look' at Portrush as a future venue for their golfing jewel in the crown, and subsequent visits by Chief Executive Peter Dawson appear to support the view that the course is under serious consideration.

That would require organisation and infrastructure on an even larger scale, but the prospect of Northern Ireland hosting one of golf's annual majors for the first time since its only previous appearance on the Open rota back in 1951 would already seem a step closer.

The sign which greets visitors to the seaside town reads 'Welcome to Portrush. The major golf capital of the world'.

Hopefully Royal Portrush will be in a position to back up that bold claim by hosting the biggest strokeplay tournament in the world in the not-too-distant future.