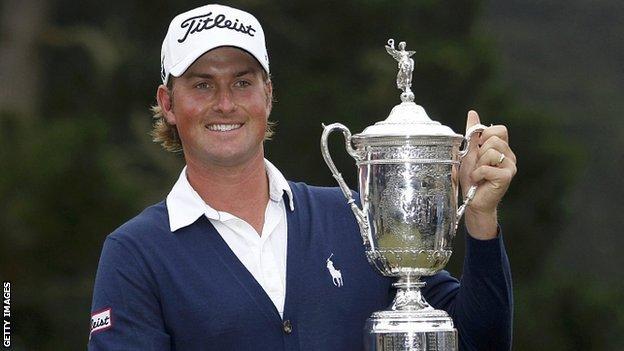 American Webb Simpson clinched his maiden major title with victory on an absorbing final day of the US Open.

The 26-year-old beat Northern Ireland's Graeme McDowell and fellow American Michael Thompson by one shot at a foggy Olympic Club in San Francisco.

Simpson shot 68 to set the target at one over and watched as 2010 champion McDowell missed a 25ft putt to force a play-off on the 18th.

Lee Westwood took 73 for five over, while Tiger Woods (73) was seven over.

Simpson, who climbs to fifth in the world, becomes the 15th different major winner in a row, the ninth straight first-time winner and the third consecutive American to win one of golf's grand slam events.

"I've never felt nerves like I felt today," said Simpson, who was pipped to the US money list title by England's Luke Donald last year. "I had to hit my legs because I couldn't feel them.

"I probably prayed more the last three holes than I ever did in my life."

Starting the final day four shots behind co-leaders McDowell and Jim Furyk, Simpson made his move with a spell of four birdies in five holes from the sixth.

Parring his way home, he bettered the clubhouse mark of first-round leader Thompson, who shot 67, and took the outright lead when Furyk, who had been in front all day and led by two at one stage, bogeyed 16.

Both 2003 champion Furyk and McDowell had a chance to force an 18-hole play-off on Monday, but the 42-year-old American finished with another bogey via the left bunker on 18 for a 74 to end two back and McDowell could only make par for a 73.

"It was grind and a slog, but I'll be back," said the 32-year-old McDowell, who had hoped to make it three Northern Irish wins in a row following Rory McIlroy's success last June.

"There's a mixture of emotions inside me right now, disappointment, deflation, pride but mostly just frustration."

Furyk, whose hooked drive on the par-five 16th sparked his downfall, said: "I don't know how to put that one into words, but I had my opportunities and my chances and it was right there.

"On that back nine, it was my tournament to win. I've only got myself to blame."

Ireland's Padraig Harrington put up a serious challenge for a fourth major title and first since 2008 with a run of five birdies in 11 holes. But needing a birdie at the last to join Thompson, he ran up a bogey five after finding sand with his approach and ended with a 68 to finish three over.

The South African, who was third to McDowell at Pebble Beach, was one stroke off the lead after 15 but bogeyed the 16th and 18th for a 72.

We shouldn't be too surprised at Simpson's victory. Twice a winner of big tournaments on the PGA Tour last year he is part of the wave of younger American players which shows that however good European golf appears to be at the moment, things are fairly bright on the other side of the Atlantic as well.

England's world number three Lee Westwood was in contention for his first major title at the 57th attempt, but was derailed when he lost a ball, seemingly stuck up a pine tree on the fifth. He was forced to go back to the tee and play another and ran up a double bogey from which he never fully recovered, despite an eagle on 17.

Woods, chasing a 15th major title and first for four years, began bogey-bogey-double bogey and dropped six shots in his first six holes. The former world number one fought back with birdies on the eighth, 14th and 17th but could only finish in a tie for 21st with, among others, England's Justin Rose (72).

"Overall, the way I struck the golf ball, the way I controlled it all week is something that's very positive going forward," said the 36-year-old Woods.

"I was just a fraction off just a couple yards here and there and that's all it takes. I had so many balls that landed in the fairway that went into the rough."