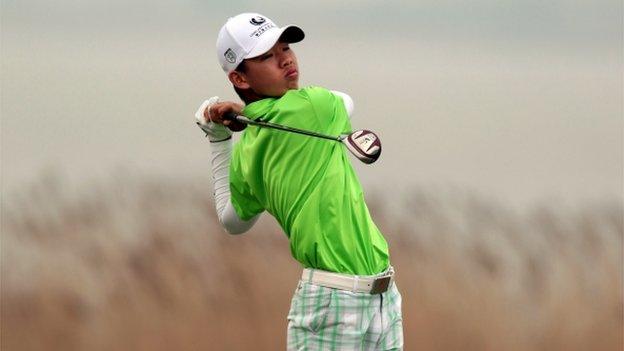 Guan Tian-lang shot a five-over-par 77 as he became the youngest player to compete on the European Tour, aged 13.

The Chinese amateur, who is 13 years and 173 days old, bogeyed his first hole at the China Open and dropped four more shots in his next five.

He birdied the seventh but bogeyed the ninth to turn five over before parring all nine inward holes.

England's Matthew Baldwin shot a seven-under 65, to lead six players, including compatriot Gary Boyd by one.

Baldwin, who sank seven birdies in his bogey-free round, said: "My caddie and I set out with a gameplan of trying to make 18 pars and take our chances when they came, and it turned out to be one of those days where there were a lot of chances and I managed to take a few of them."

But the main focus was on Guan, who beat the record of compatriot Lo Shik-kai, who was 107 days older at the 2003 Hong Kong Open.

He started playing golf at the age of four and has claimed numerous age group titles around the world, including last year's World Junior crown in San Diego by 11 shots after a nine-under-par 63 on the opening day.

Guan booked his place in the 156-man field after finishing fourth in a mid-China qualifying event and he finished day one in a tie for 149th.

But it could have been worse for the teenager who carded a five at the par-four first, double-bogeyed the par-four fourth and dropped further shots at the fifth and sixth.

Englishmen Graeme Storm and Richard Finch are among a group of players, including Scotland's Richie Ramsey two off the lead.

The youngest player to make a European Tour cut is Jason Hak, who played all 72 holes at the Hong Kong Open as a 14-year-old amateur in 2008.

Belgium's Nicolas Colsaerts won last year's tournament by four strokes, his first and only win on the European Tour.