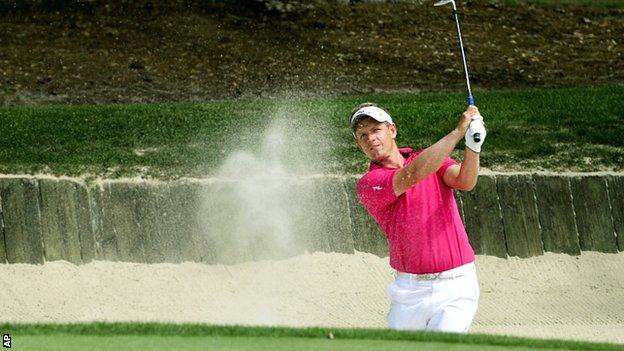 Luke Donald's world number one position remains under threat after a 71 in the third round left him 14 strokes behind the leader at the RBC Heritage.

The 34-year-old Englishman needs to finish in the top eight at Hilton Head, South Carolina, to stay above Northern Ireland's Rory McIlroy in the rankings.

Having survived the cut by two shots he mixed three birdies with three bogeys to stay two over, and is tied for 52nd.

Sweden's Carl Petterson carded a 66 for a one-shot advantage at 12 under.

Donald, who tied for 32nd at last week's first major of the season, the Masters, moved up four places from his overnight 56th but is three further shots off the lead than he was after round two.

Changes at world number one

He spent 40 weeks at number one before being replaced by McIlroy in March, when the US Open champion won the Honda Classic by two strokes.

Petterson, who won the last of his four PGA titles at the 2010 Canadian Open, was two shots behind halfway leader Colt Knost but posted five birdies in succession from the second hole.

The 34-year-old then rolled in a birdie from inside eight feet at the dangerous 18th to lead Knost, who is second after an eagle and three birdies in a round of 69.

Defending champion Brandt Snedeker had a double bogey at the third and is tied for fifth, six shots off the pace, while Englishman Brian Davis, seeking a maiden PGA title, returned a second successive 68 and shares eighth, one shot further back.