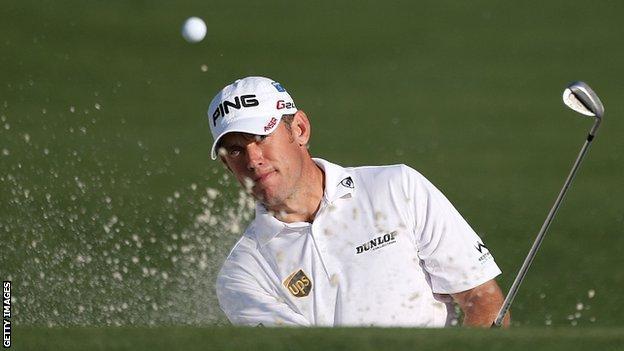 England's Lee Westwood has dismissed the suggestion this year's Masters is a two-horse race between Tiger Woods and Northern Ireland's Rory McIlroy.

With the American media looking for an angle to hype this year's event, the McIlroy-Woods rivalry is being stoked.

I'm pretty confident. I have started this season better than I do most seasons, with some good results, and had a couple of chances to win

World number two McIlroy looked like winning at Augusta last year until he crumbled to a closing 80, falling from four ahead to 10 behind winner Charl Schwartzel.

However, two months later he won the US Open by eight shots and last month briefly topped the world rankings after winning the Honda Classic in Florida.

Fourteen-time major winner Woods, who has won four times at Augusta, tumbled down the rankings following personal issues and injury but is now back up to seventh.

He won at Bay Hill a fortnight ago and some of his rivals are suggesting he is swinging the club as well as ever.

Westwood, 38, has had two spells as world number one himself, but after 55 majors is still searching for his first major victory.

He added: "I'm pretty confident. I have started this season better than I do most seasons, with some good results, and had a couple of chances to win.

"My game feels in good shape. It was good to play in Houston last week and shake off a bit of rust and be competitive going into this week.

"It's frustrating when you are hitting a lot of good shots tee-to-green and you're playing well enough to win tournaments but you are not making the putts.

"But I feel a lot more comfortable. He [putting coach Phil Kenyon] has given me a few better ideas about what makes a good putt and what I have to do in my stroke to putt well."

In addition, Westwood said going close at Augusta in 2010, when he finished second behind a strong-finishing Mickelson, convinced him he could one day prevail.

"I always felt like the golf course suits my game," said Westwood. "But when you come close like that it gives you an extra boost.

"I played all right that last day. It's just Phil played really well, shot a 67. Sometimes there is nothing you can do about that."