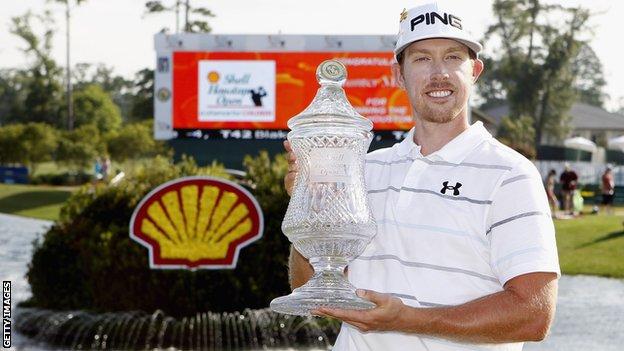 Hunter Mahan clinched victory in the Houston Open by a single-stroke in a dramatic finish.

Mahan held his nerve on the difficult 18th to pip Sweden's Carl Pettersson to the title.

The victory is expected to move Mahan up to fourth in the world rankings, a position which will make him the highest-ranked American at the Masters.

"I feel great," he added. "I had the lead for most of the back nine and hit some clutch shots."

Mahan had established a one-stroke lead at the halfway stage of the final round.

Oosthuizen, who had a two-shot overnight lead, endured a difficult day - the South African dropped five shots before the turn to eventually finish third.

He carded double bogeys at the fifth and eighth and, coupled with further dropped shots at two and nine, his hopes evaporated as he found himself well off the pace.

Davis, 37, had battled to stay in contention on 13 under after a rollercoaster round.

London-born Davis had already dropped four shots when he double-bogeyed the fifth, yet he clawed it back with four birdies before the 11th.