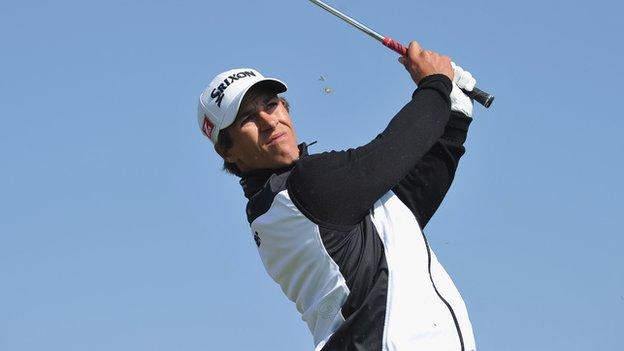 Denmark's Thorbjorn Olesen held off a brilliant final-day charge by England's Chris Wood to win the Sicilian Open by one shot.

The 22-year-old carded a three-under 69 to finish on 15 under and take his first European Tour title.

Wood had earlier climbed up the leaderboard by firing an eight-under 64 to equal the course record.

Another Dane, Soren Kjeldsen, and Belgium's Nicolas Colsaerts, finished two shots further back on 12 under.

Olesen began the day with a three-shot advantage, but a mixed start that included two birdies and two bogeys in his opening five holes, saw Wood join him on 14 under.

The 24-year-old from Bristol, also looking for a first Tour win, was five under through the first five, and advanced to eight under for the day with six holes remaining.

A further birdie at 14 followed, but a bogey on the par-five 17th proved to be decisive, as Olesen closed out the win with pars on each of the last four holes.