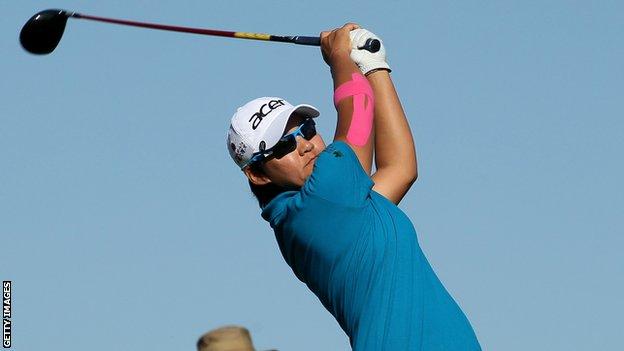 Karin Sjodin overcame a suspected dislocated rib to move into a share of the lead in the Kraft Nabisco Championship in California.

The Swede, ranked 216th in the world, shot a four-under-par 68 to sit alongside overnight leader and world number one Yani Tseng on nine under.

Taiwan's Tseng, aiming for a third Tour win a row, carded five birdies and four bogeys in her 71.

Haiji Kang is third on seven under, one ahead of a group of five other Koreans.

Scotland's Catriona Matthew, two under par after shooting a 70, leads the British challenge at the first major of the season.

While Tseng is a five-time major champion, the long-hitting Sjodin has never won in seven seasons on the LPGA Tour and has finished no higher than 19th in her 18 majors.

However, beginning the day three strokes back, the 28-year-old made just one bogey in an impressive round played in difficult, blustery conditions.

"The day was just kind of smooth," said Sjodin, who sustained the injury while playing on Friday. "I never felt like I was ever in trouble."

Tseng said: "I'm glad this happened today instead of tomorrow. I was thinking too much and trying too hard. It's good to find out earlier."