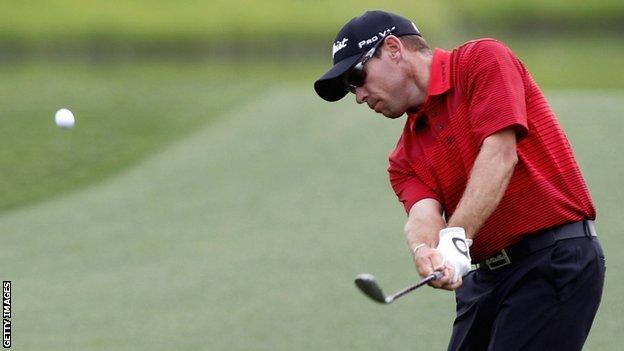 England's Brian Davis and Louis Oosthuizen share the lead after two rounds at the Houston Open as rain played havoc with the schedules.

Thunderstorms on day one caused a back up on Friday so when bad light eventually suspended play, 70 players had yet to complete their rounds.

Ernie Els, who must win the Texan event to qualify for next week's Masters, is six shots off the lead.

Lee Westwood, Paul Casey and Graeme McDowell are among those yet to finish.

This morning was pretty tough. The ball was flying everywhere

Nearly an inch and a quarter of rain fell on Thursday, leaving greens submerged by water.

The weather proved frustrating for those who are preparing or still trying to qualify for the first major of the year at Augusta which starts on Thursday.

But conditions improved sufficiently to allow play to get under way on Friday with players allowed to lift, clean and place their balls because of damp fairways.

Davis and Oosthuizen managed to complete their rounds, scoring 65 and 66 respectively to share the lead on 11-under par.

"It was a good day at the office today," said Davis, who is based in the United States and has never won on the PGA Tour.

"This morning was pretty tough. The ball was flying everywhere. We got the ball in hand this afternoon, you know, and got a flag to go at."

Phil Mickelson was one of the lucky players who managed to finish his round, with the American following up his opening round of 65 with a two-under par 70 to lie two shots off the lead in tied-fourth.

"I played really well," he said. "I didn't quite take advantage of the opportunities that I did in the first round where I hit a lot of good shots close."

Jeff Maggert of the United States lies third, one shot off the leaders. However, he still has eight holes to play on the second round.