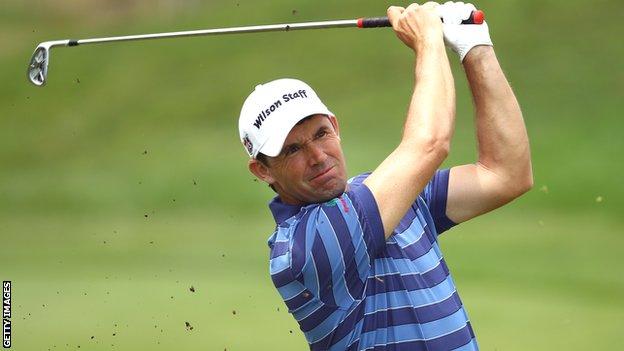 Padraig Harrington is hoping the move to his "favourite course" will inspire him to a second Irish Open title.

The three-time major winner is delighted that Royal Portrush will host the event from 28 June-1 July.

"There are a lot of things which make Portrush so special," said the Dubliner, who won the event in 2007.

"You always feel like you can make a score round there, but it's not as easy as you think, so you've just got to try to be fearless."

For the first time since 1953, Ireland's national Open is being held north of the border.

Harrington believes the 6,843 yards, par 72 course is an ideal venue.

He added: "It's a very fair test of golf - if you hit good shots you'll be rewarded with birdies, but hit bad ones and you'll run up bogeys or double bogeys.

The people of Northern Ireland have always loved their golf

"It's also a very scenic place to play golf, with some stunning views. Over the years I played a lot of amateur tournaments there, and the atmosphere was always second to none.

"The course is right in the town which is usually buzzing, so as a venue it's got everything going for it."

With Darren Clarke, Graeme McDowell and Rory McIlroy also confirmed, there will be four major champions from Ireland in attendance at Royal Portrush.

Harrington is expecting the Irish golfing public to stage their traditional show of support.

"The people of Northern Ireland have always loved their golf," he said.

"They always turned up in great numbers to support amateur events, so in some ways taking the Irish Open to Portrush is a reward for their support and loyalty.

"I can guarantee this year's Irish Open will be as well-attended as any in the past, which should guarantee a great atmosphere."