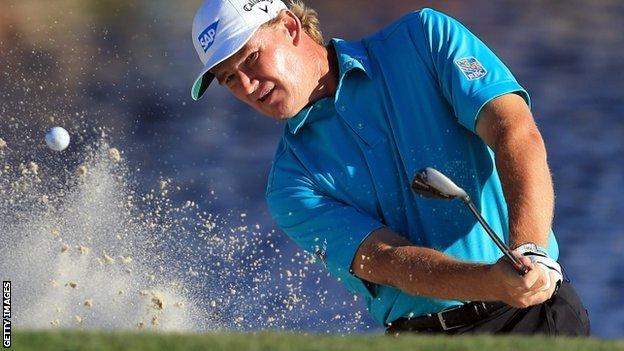 South Africa's Ernie Els has refused to put pressure on himself ahead of the Houston Open despite it being his final chance to qualify for the Masters.

Els, who has not missed the Masters since 1993, must win the Texan event, which starts on Thursday, to qualify for the first major of the year.

He said: My goal here is not to get into the Masters, it's to play the Houston Open as good as I can."

Lee Westwood and Graeme McDowell will also be in action in Houston.

If I get into the Masters, that's great. If I don't, then I've had many Masters that I can look back at, and I'll get back in there next year

Els needed to finish outright third or higher at last weekend's Arnold Palmer Invitational to guarantee his spot at Augusta where he finished runner-up in 2000 and 2004.

But the 42-year-old finished tied for fourth - his second successive top-five finish - to miss out.

"I just want to have a good week. If I can win, obviously, that would be absolutely wonderful," said the three-time major winner.

"If I get into the Masters, that's great. If I don't, then I've had many Masters that I can look back at and I'll get back in there next year."

World number three Westwood is using the Texan event, which features light rough and fast greens like Augusta, as his Masters warm-up event for the fourth successive year as he bids to win a major at his 56th attempt.

ELS BEST RESULTS AT THE MAJORS

"I feel like my game is better equipped to tackle major championship golf courses," said Westwood, who has six top-three major finishes in the past four seasons.

"You really should go into it treating it like just another tournament. We have plenty of them and major championships are no different."

While former Masters champions Tiger Woods and Phil Mickleson have decided to arrive at Augusta early to begin their preparations, Westwood has not followed suit.

"I didn't think it was that necessary," he said. "It's a nice place to go and soak up the atmosphere with nobody there and get some work done, but the course isn't really reflective of how it's going to be on Thursday morning next week.

"It changes so much in three days. I just decided not to this year and thought the extra couple of days at home would do me more good."