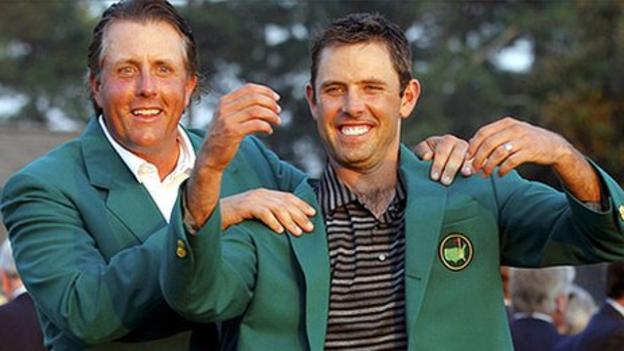 South Africa's Charl Schwartzel emerged from the pack to clinch his maiden major title on an absorbing final day at the 75th Masters.

The 26-year-old fired a closing 66, including birdies on the last four holes, to reach 14 under and beat Australian duo Jason Day (68) and Adam Scott (67) by two shots at Augusta.

Northern Ireland's Rory McIlroy, 21, who led for three rounds, collapsed on the back nine and carded a round of 80 to end four under.

Schwartzel becomes the third South African to win the Masters on the 50th anniversary of Gary Player's breakthrough win for a non-American at Augusta. Player also won in 1974 and 1978, while Trevor Immelman triumphed in 2008.

"It was such an exciting day, with all the roars," said Schwartzel. "The atmosphere was just incredible."

His victory means that for the first time since 1994, none of the four majors are held by an American. He joins countryman Louis Oosthuizen, who won the Open last July, Northern Ireland's Graeme McDowell (US Open) and Germany's Martin Kaymer (US PGA).

McIlroy was not ready to win a major

Schwartzel, who was tied 30th on his debut last year, is a six-time winner on the European Tour and climbs to 11th in the world rankings.

The Johannesburg-born player started the final day tied second with Cabrera on eight under, four strokes off McIlroy's overnight lead.

But he made an electric start to the fourth round, chipping in from off the green for a birdie at the first and holing his second from the fairway for an eagle at the third hole to reach 11 under and share the lead with McIlroy, who bogeyed the first.

However, Schwartzel slipped back to 10 under at the fourth, where he would remain until his final birdie barrage.

McIlroy slipped further back at the fifth but recouped the stroke at the seventh and still led by one from Schwartzel, Cabrera, KJ Choi and Woods after the ninth.

But when McIlroy endured a nightmare spell of triple-bogey, bogey and double bogey from the 10th, the tournament was wide open.

Scott became the first player to reach 12 under after a birdie on the 16th but could only par his way home.

"It's just disappointing that I didn't win when I held the lead with a few holes to go," said the 30-year-old.

"I'm usually a pretty good closer. I didn't do a bad job but Charl was better. It was an incredible finish. I'm proud of the way I played but I'm disappointed that I didn't get it done when I was right there at the end."

Scott's playing partner Day birdied four of the last seven holes, including the last two to jump up to a tie for second with his compatriot.

However, he said: "You can't do anything about a guy who birdies the last four holes of a tournament.

"If you want to go out and win a tournament, that's how you do it.

"Obviously we fell short a little bit but it just shows how good Australian golf is right now."

At one stage it had looked like it was going to be Woods's day. The former world number one began the final round seven shots behind but four birdies in the first seven holes hinted at a potential charge up the leaderboard.

When he then eagled the eighth hole to get to 10 under and post a front nine score of 31, the momentum seemed to be behind him.

But he squandered birdie chances on the par-five 13th and par-three 16th when it looked like he was about to surge clear and had a good chance of an eagle on the 15th but could only make a birdie as he finished tied for fourth for the second straight year at Augusta.

"I got off to a nice start there and posted 31," he said. "And then on the back nine, I could have capitalised some more.

"I should have shot an easy three or four under on the back nine and I only posted even. I didn't putt well and hit one loose iron at 13.

"[But] this entire weekend I hit it good, so that was a nice feeling. I had to be committed to my spots and I did that all week."

His search for a 15th major continues as he looks to chase Jack Nicklaus's record of 18.

Australia's search for a first-ever Green Jacket must wait another year. Scott and Day both challenged until the very end to match Greg Norman, who managed three second-placed finishes at Augusta.

Ogilvy made five birdies in a row from the 13th to get to 10 under and tie with Woods and Donald, who birdied four of the last six but then bogeyed the 17th to end any hopes he had of a first major. Donald's fourth place finish sees him move up to third in the world rankings.

Reigning champion Phil Mickelson never threatened as he shot 74 to finish well down the field.

Lee Westwood shot a closing round of 70, featuring four birdies and a double-bogey at the short 12th after finding water, to finish in a tie for 11th with compatriot Justin Rose, who carded a 68.

Ross Fisher finished on four under, with Scotland's Martin Laird a shot further back on his Masters debut.