Women across the UK are being urged to take to two wheels by British Cycling.

The sport's national governing body want to address the gender imbalance in cycling by getting a million more women on bikes by 2020.

Research in 2018 showed two-thirds of cyclists in the UK are men compared to countries like Denmark, where there are more women cyclists than men.

The 'One in a Million' campaign aims to tackle perceptions which prevent women from getting on a bike.

Olympic champion Sir Chris Hoy is one of the elite cycling stars backing the campaign.

"Cycling, in all its forms - whether it's commuting, competing, coaching or as a career - must be just as appealing to women as it is to men," said the six-time Olympic gold medallist.

Cycling helps me with all aspects of my life now

"There are women's only Breeze rides across the whole of the country waiting to welcome beginners.

"If we are to close the cycling gender gap we need to show women that it is safe, you don't have to be super fit or have a wardrobe full of lycra.

"Getting a million more women in the saddle will be a great feat."

"Growing up as a girl I wasn't allowed to cycle," says Selma from Greater Manchester, who is supporting the campaign.

"Nobody else in my culture or family or area (Old Trafford) cycled."

But, at 21 years old, Selma joined a Bikeright! scheme and learnt to ride a bike - in secret.

"I made a conscious effort to come home quickly to show my mum 'look, I'm home earlier and safely being on the bike and I can leave at my will and I'm feeling fitter'.

"Slowly they adjusted and people started asking 'whose is this bike? It's really, really cool that she cycles'.

"And then, when my parents realised that they weren't being ostracised for having a young girl in the family cycling, they absolutely warmed to the idea."

Selma has now influenced her entire family to take up cycling!

A British Cycling-commissioned survey in 2018 showed more than six in 10 women (64%) saying they don't feel confident riding their bike on the roads - that's 26% higher than men.

"Cycling is increasingly being understood as a fundamental part of the solution when it comes to issues of public health and air quality," said British Cycling chief executive Julie Harrington.

"However change will not come unless people feel safe on the roads and we know this disproportionately affects women.

"We want women to know that cycling is safe and there are plenty of easy and accessible options available for people wanting to get started."

'Cycling has completely changed my life'

Indigo Kelly Forest had just such doubts - but says getting into cycling has transformed her life.

"I was a size 24 when I first got on a bike," says the primary school teacher from Leicestershire.

"I was dealing with grief after losing my mother and decided 'enough is enough'.

"Despite feeling embarrassed to even be seen on a bike, I discovered my local Breeze club and I've never looked back."

Indigo has since gone on to form a non-profit organisation which runs cycling holidays and is an active member of the Leicester Women's Velo cycling club.

"Cycling helps me with all aspects of my life now, from my physical and mental wellbeing to pushing me on to achieve things I never thought I could," Indigo adds.

"Before I started cycling I had a perception that it was unsafe, and that cycling wasn't for me.

"But getting over that initial hunch was the best thing I ever did - it's completely changed my life."

'Your cycling, your way'

Rachael Halifax has passed on her love of cycling for many years and has sage advice for any women still wondering about getting on two wheels.

"Go out with people who have experience of riding on the road so you have company and confidence," says the Scot.

"Cycling Scotland for example have instructors that will help you route find if you want to commute.

"There are lots of cycle paths around big cities and a lot are traffic-free.

"And Breeze is phenomenal and gives you access to a ride in a safe environment.

"Regardless of where you are in the UK, you should be able to find a Breeze ride of a suitable length to get you back into cycling or challenge yourself."

What might work for one woman might not work for the next, Rachael admits, but is confident there are solutions out there for everybody. 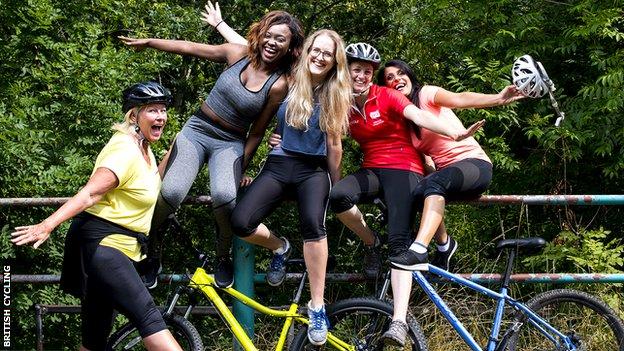 "Women want to go out on their own terms in their own way , in an environment in which they feel comfortable.

"Your cycling, your way - whether you want to ride five miles in your jeans and have a coffee or do a mountain-bike marathon.

"And some women are looking for opportunities to learn at the same time.

"There are lots of organisations that will help people."