A new chair-based gymnastics exercise programme has significant benefits for people with dementia, says a report.

More than 150 people have taken part in the Love to Move scheme run by the British Gymnastics Foundation (BGF).

And research by Age UK found the scheme to have "demonstrable benefits in the physical, emotional and cognitive aspects of older people".

The organisers now aim to train more people to deliver the programme and make it more widely available.

"So many people involved are seeing their lives improving as a result and it is unthinkable that people are regaining functions which were thought to be lost because of participating in the Love to Move classes."

I thought the programme would, at best, just be able to slow down the rate of dementia progressing, but I am finding some participants appear to be regaining functions which were thought to be lost

In South Korea and Japan, results have been so positive the programme has been completely state-funded and runs in every care home across the two countries.

From Tokyo to Cambridgeshire...

Exercise in any form can have a multitude of health benefits for those with mental and physical illnesses. Dementia is no exception.

When the BGF discovered a chair-based exercise programme was working wonders throughout care homes in Japan and South Korea, it was determined to bring it to the UK.

Based on results published in 2016 from the original Japanese programme, it was clear to the BGF that these simple exercises - based around cognitive stimulation, memory arousal and music - could have a huge impact on the lives of dementia sufferers.

By taking the core principles of the Japanese scheme and adapting them to suit British culture, the BGF developed the Love to Move programme in a pilot scheme.

Can you tap your head and rub your stomach at the same time? Even if you can, it takes a lot of concentration.

By practising it, you are increasing your ability for the right and left sides of your brain to process information independently of each other.

The Love to Move programme is based on the concept of bilaterally asymmetrical movement (performing different movements with the right and left sides of the body at the same time).

By increasing the capacity to perform bilateral movement, the brain increases the number of connections it makes between its neurons, resulting in an increase in cognitive ability.

For people with dementia, the Love to Move programme has been proven to increase their capacity to process everyday tasks such as feed themselves, do crafts and play bingo, as well as socialising with friends and family.

Try it for yourself

Do you know a family member, a friend, a co-worker, who has dementia? Chances are you do. 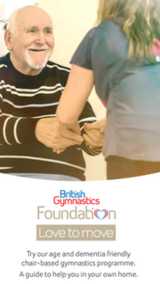 Want to give it a go?

Whether they've just been diagnosed, or have had the illness for a number of years, those close to them would give anything to see an improvement in their health.

The BGF understands this and is keen to share its exercises with the public in the hope they can provide those affected, both now and in the future, with a practical and gentle way to improve their health.

The BGF has created a downloadable booklet containing some of the key exercises for people to try with top tips from head coach Kim Hall.

The guide aims to give an insight into the structure and history of the programme, as well as showing some of the key co-ordination exercises.

Over a period of two years in the Cambridgeshire region, the Love to Move programme has delivered sessions focusing on improving co-ordination, posture, movement and core strength.

In conjunction with the pilot scheme, staff from one care home were asked to complete feedback forms for a sample of residents who took part in the exercise classes.

Two residents involved were keen not to go off with their visitors…they did not want to miss the class, so they got them to join in as well!

Results from the pilot scheme indicate exercises such as hand rotations, finger and thumb tapping, drawing shapes in the air and nose and ear grabbing, are effective ways to enhance co-ordination, whereas exercises focusing on balance and core have better equipped participants to sit, unaided, in their chairs.

Those with more severe cognitive decline were seen to develop a more positive emotional state.

By joining the classes, it was visible to the care home staff that participants were visibly enjoying themselves, appeared more relaxed and even remembered the class and looked forward to the next one.

Social interaction is often difficult for those with dementia, especially for those who would not normally have the opportunity to mix with other residents in the same home.

The pilot scheme gave these residents the opportunity to build bonds with one another, provide encouragement to their fellow Love to Movers, and socialise after the session.

As with any pilot scheme, the aim is to learn, adjust and expand; and this is what the BGF hopes for.

I feel stronger. I have difficultly moving, but I've started to move more than I have before

The findings from Age UK reveal sessions need to take place in a social, fun environment, be lead by confident, patient staff and include time for refreshment afterwards.

The BGF aims to replicate Japan's success and offer the Love to Move programme to all care homes up and down the country.

They say a large amount of staff training is required, in addition to a nationwide awareness campaign and a group of trained coaches to deliver the sessions.