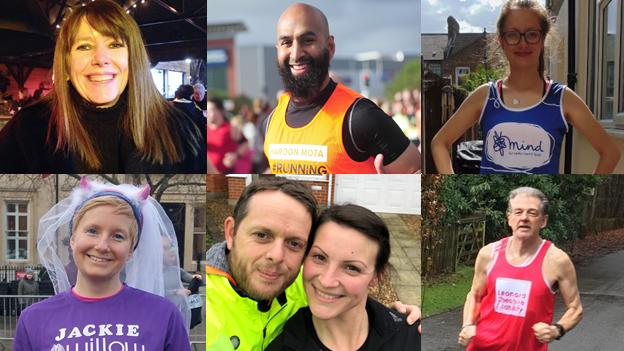 More than 250,000 people entered their name into the London Marathon 2017 ballot. Some were running to beat their best time, some dressed as animals, cartoon characters and even London buses, and some just hoped to cross the finish line still standing.

But practically everyone whose name was pulled out of the ballot this year had one thing in common. They were running to raise money for a charity or organisation that means something to them.

From dealing with mental health problems, living with life-changing medical conditions or overcoming traumatic circumstances - we talk to seven individuals who were 'Running for a Reason' on Sunday, 23 April. 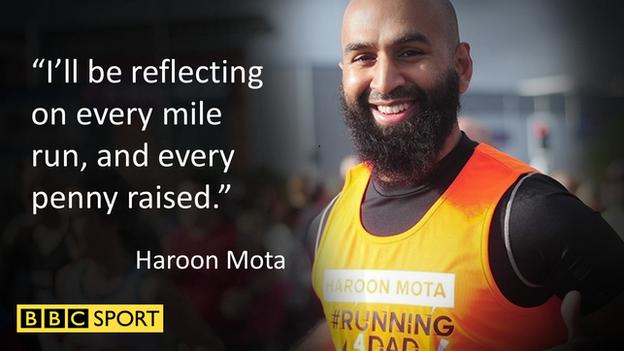 Haroon, 31, first ran the London Marathon in 2012. After what he described as a "painful and exhausting experience", he vowed never to do it again.

But that all changed four years ago, when his father was suddenly killed in a car crash. Haroon wants to honour his dad, who was always striving to make life better for others.

Running shoes back on, and determined to make his dad proud, Haroon decided to take on the mammoth mission of completing four marathons in one month.

"He is my motivation and I'm determined to make this challenge a success," Haroon said.

Before I complete the last mile, at the finish line, I want to look up to the skies and say 'Yes, I did it!'

Haroon was running for the Penny Appeal, a global, humanitarian charity working to find water and food solutions, orphan care and medical aid in disaster and conflict areas. Over the four marathons, he aims to raise £20,000 in order to build a Solar Water Power Centre in Africa.

After three marathons, London was his biggest challenge yet. But knowing he has been making his dad proud, Haroon had all the motivation he needed. 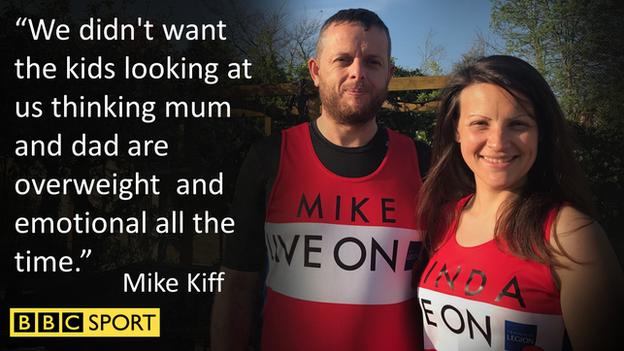 When Mike Kiff sustained a serious shoulder injury while on tour with the Army in Afghanistan, he was medically discharged after more than 16 years of service. He suffered with adjustment disorder and depression, which both he and his family found painful and debilitating.

Seeing her husband suffering both physically and mentally, wife Linda struggled to stay positive for their two young children and she too suffered from depression.

The Royal British Legion provided the couple with respite and counselling at a recovery centre in Germany. When Linda started running to clear her mind, she found the exercise extremely therapeutic. She lost four stone, felt happier and healthier, and Mike - admiring his wife's new-found optimism - wanted to follow in her footsteps.

"When I saw how running was helping Linda lose weight and cope better with her own depression, I wanted to see if it would work for me too," Mike said. "Sure enough it did. I managed to wean myself off antidepressants in about two months."

They ran the London Marathon to raise money for the charity that helped their family rebuild their lives. "Thanks to the Legion, I was finally able to deal with the situation. I don't know what I'd have done without them," he added.

"We're doing something we love, that makes us feel better, while raising money for the charity that provided support for us when we needed it the most." 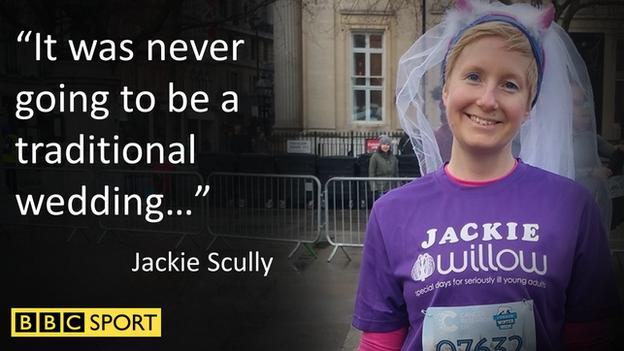 For most brides-to-be, these would be vital elements on the wedding planning checklist. But when Jackie Scully started to plan her big day, she didn't expect "run the London Marathon" to be top of her list.

Jackie's battle with breast cancer started just days after Duncan proposed to her. "My world was completely crushed," she said. "I'd been planning our future together and that future suddenly felt so uncertain."

It was at her parents' house, during her recovery, when Jackie first picked up an old pair of trainers and asked her dad if he fancied a run.

"I went on a completely different course in life, and now I wanted to prove to my body I was over giving it horrible things," the Londoner explained.

A whirlwind of training, fundraising and recovery followed, until Jackie felt healthy and strong enough to put her body through another, very different, challenge.

After saying their vows at dawn aboard the Cutty Sark, the newlyweds and Jackie's father headed back to the start (in full wedding attire) to run and raise money for two cancer charities - Willow and Breast Cancer Care.

"As amazing as it would be to have my dad walk my down the aisle at my wedding, having him next to me for 26.2 miles - this is the only way I wanted to get married," Jackie added. 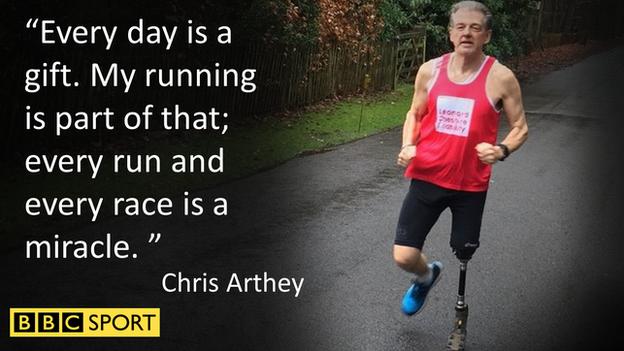 Chris always loved running. With nine marathons under his belt, in 2008 Chris was enjoying life to its fullest.

But a life-threatening road accident while on holiday in the USA changed everything for him and his wife Denise.

While he was in a medically induced coma, the doctors asked Denise - who also had to have her left leg amputated as a result of the accident - if she consented to the removal of her husband's leg.

"Take the leg away, and he will run another marathon," Denise replied.

When Chris came around and the realisation of what happened hit him, it was difficult to see a positive future ahead of them. But after a recovery and rehabilitation programme in America, they returned to England feeling optimistic.

With so much to be thankful for, Chris chose to raise money for the Leonard Cheshire Disability charity who support disabled people in the UK and around the world.

"For us, every day is a gift. It's hard not to be thankful when we've both survived a 135mph head-on collision and can still enjoy life," Chris said. "The medical and rehabilitation professionals gave us superb care after our accident, and helped us to stay positive."

Chris crossed the start line of this year's London Marathon, raising money for the charity that helped him and Denise rebuild their lives. And despite the fact Chris was the first over-the-knee amputee to take part, he just thought of it as another opportunity to raise money and do what he loves.

"I still love running and when I'm training or racing I'm seldom thinking about being an amputee; it's just heart, lungs, the clock and the runner I'm chasing, the same as it always was," he added.

Once a runner, always a runner. 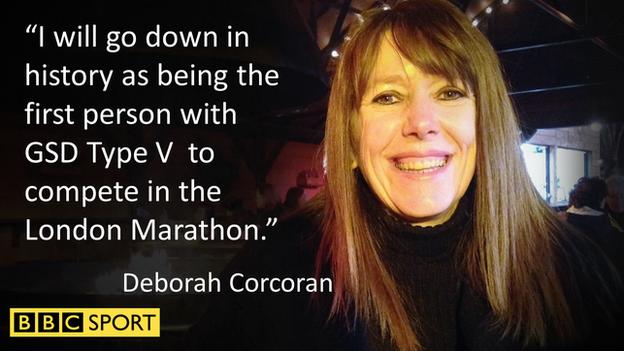 Since childhood, Deborah thought she was not cut out for sport. Maybe she was just lazy? Maybe she didn't have the motivation?

She admits being lapped during a 800m race at school was one of the most embarrassing moments of her life, thus confirming what she already believed - sport was just not for her.

After more than 20 years of doubting herself, Deborah was diagnosed with GSD Type V (McArdles) - a condition that means her muscles do not use glycogen correctly. She finally had an answer to her questions.

"If I push myself too hard I could damage muscles, collapse or go into kidney failure," she said.

Then six years ago, her life changed dramatically when she had a heart attack. After having a stent implanted to prop open her artery, preventing further blockage, Deborah knew she had a second chance in life.

"At 44, having a heart attack was a shock," says the Welshwoman. "I could feel sorry for myself or I could achieve a healthy lifestyle. I began walking and enjoyed it so much my walks became faster and longer and I felt better for it."

"It means so much to me to be competing for AGSD because their work is helping people of all ages who struggle daily to cope with these rare debilitating disorders," she said. 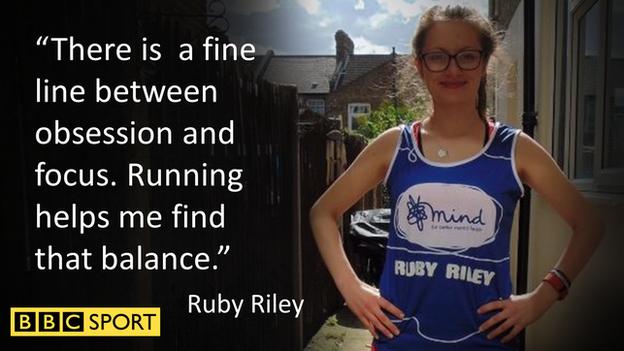 Ruby Riley, 20, is on a mission. A mission to break a long-standing taboo. The taboo surrounding mental health.

As a teenager, Ruby struggled with the pressures of A-level exams. The stress of choosing the right subjects, revising and endless essay-writing began to take its toll on Ruby's health and she suffered from anxiety and depression.

She soon developed an eating disorder - a coping mechanism that affected her life both mentally and physically. "The stress brought on a dramatic change in me and saw me desperately trying to take back control," she said.

At first, Ruby developed an unhealthy relationship with exercise.

"When I was at my worst, I would use exercise as a punishment," she admits. However, through counselling sessions, Ruby has managed to change her life around and says: "I am now able to use exercise as a celebration of what my body is able to do when I treat it properly."

Through overcoming her own demons, Ruby has been inspired to help others who are suffering in silence. She is raising money for mental health charity, MIND, which highlights mental health issues and encourages people to speak out.

Despite recently suffering from shin splints, Ruby couldn't "wait to cross the start line and soak up the atmosphere on the day" and successfully finished her first London Marathon.

Feeling inspired? There are events for all abilities so use this handy guide to find the best one for you.